The Witchers Bestiary A Guide to Relicts

The Witcher’s Bestiary – A Guide to Relicts

The toughest beasts on the Continent will likely be relicts. Each requires a unique approach in The Witcher 3 and Monster Slayer.

You Are Reading :The Witchers Bestiary A Guide to Relicts 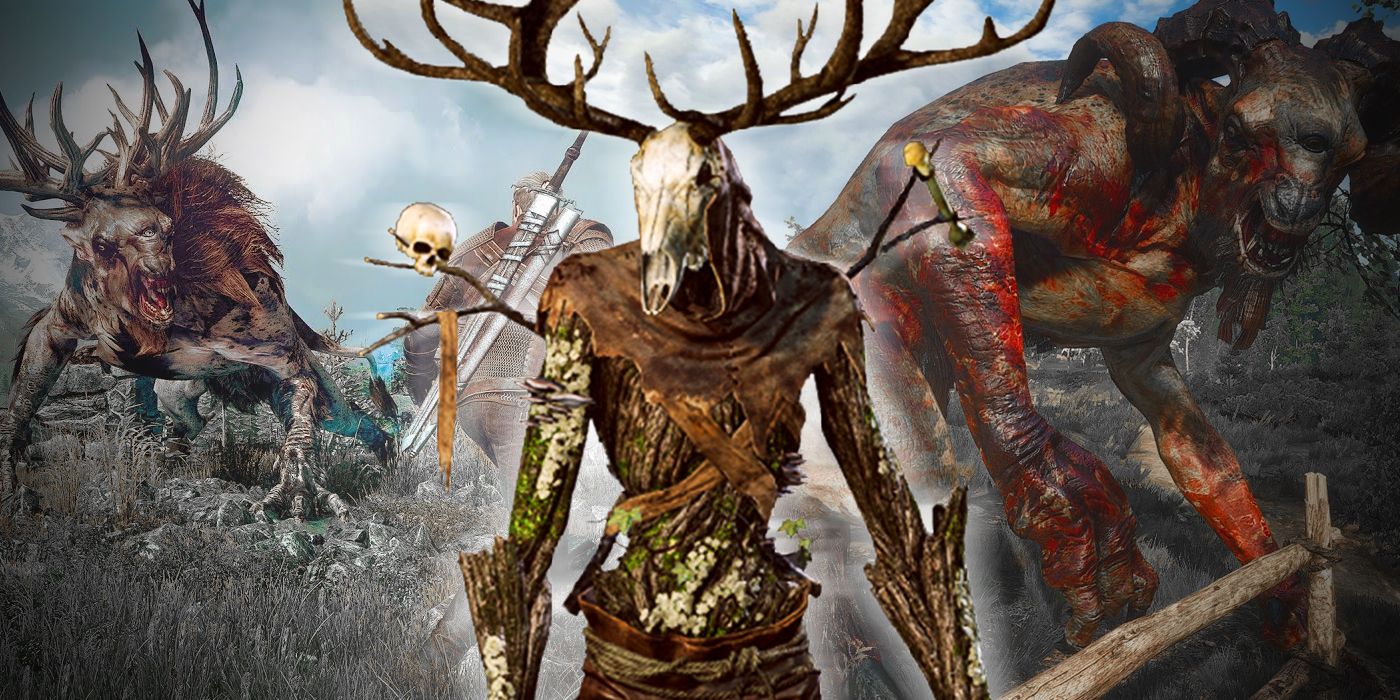 Throughout CD Projekt Red’s The Witcher 3: Wild Hunt and Spokko’s The Witcher: Monster Slayer, witchers will find that the Continent is home to certain types of monsters that don’t quite fit in with others and are defined mainly by — as the name suggests — their longevity. That longevity is oftentimes granted by a different, innate magical ability. Unlike most magical monsters however, relicts must be fought using a steel sword, as silver has no effect on them.

There are a few basic facts any witcher will need to know about relicts if they are to fight them. Only, they don’t all need to be fought. Dopplers, for example, are intelligent shapeshifting relicts that don’t generally seek to harm anyone. The same can be said for the blue, child-like creatures known as godlings. This abridged bestiary will only cover the relicts players will have to fight in both The Witcher 3 and Monster Slayer. 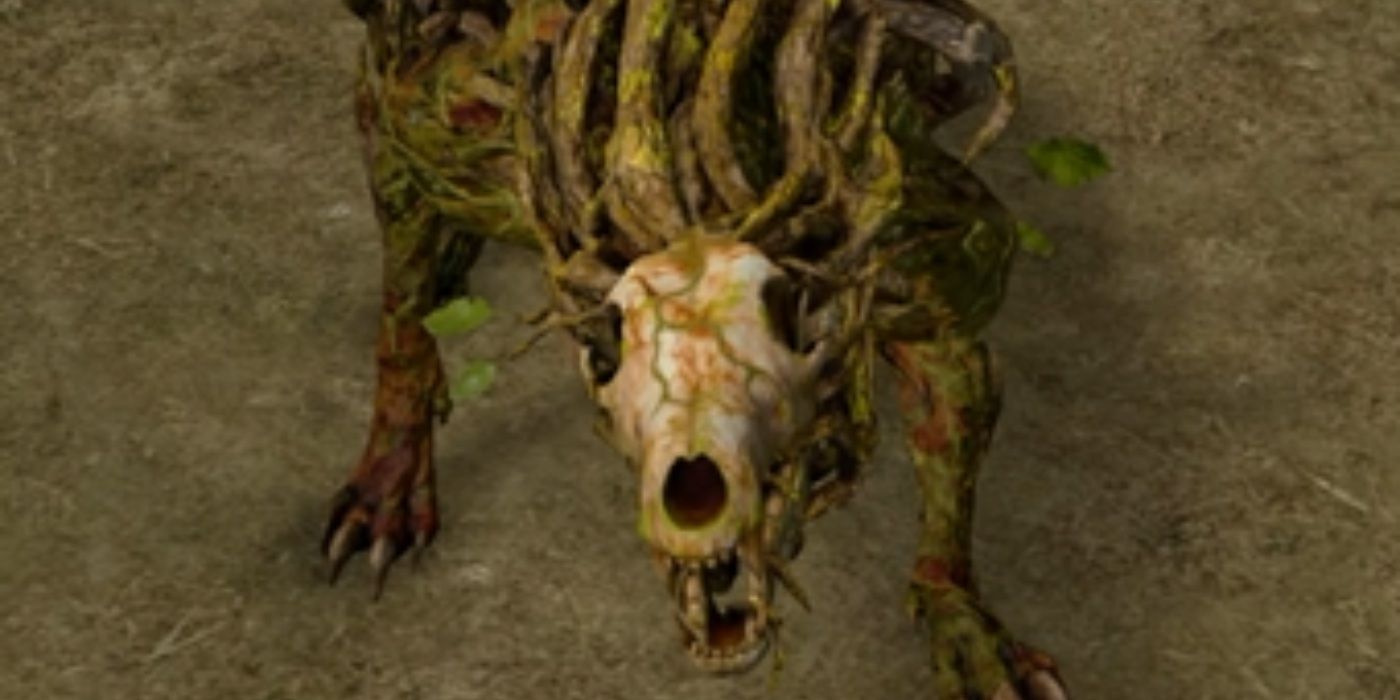 These creatures can be found in the day around forested areas. They only appear in Monster Slayer and are, thankfully, not too difficult to fight. Like a hound, they will snap and bite, but those can be easily parried. It isn’t necessary to waste a vial of relict oil on a spriggan hound.

Since these beasts are essentially made of plant roots and vegetation, Igni works effectively on them. That is the only sign you’ll need, since you’ll mainly want to focus on using strong attacks with your steel sword. If you’re out hunting for one, search during the day. It may not be as fun, but you’ll have better luck during rain. 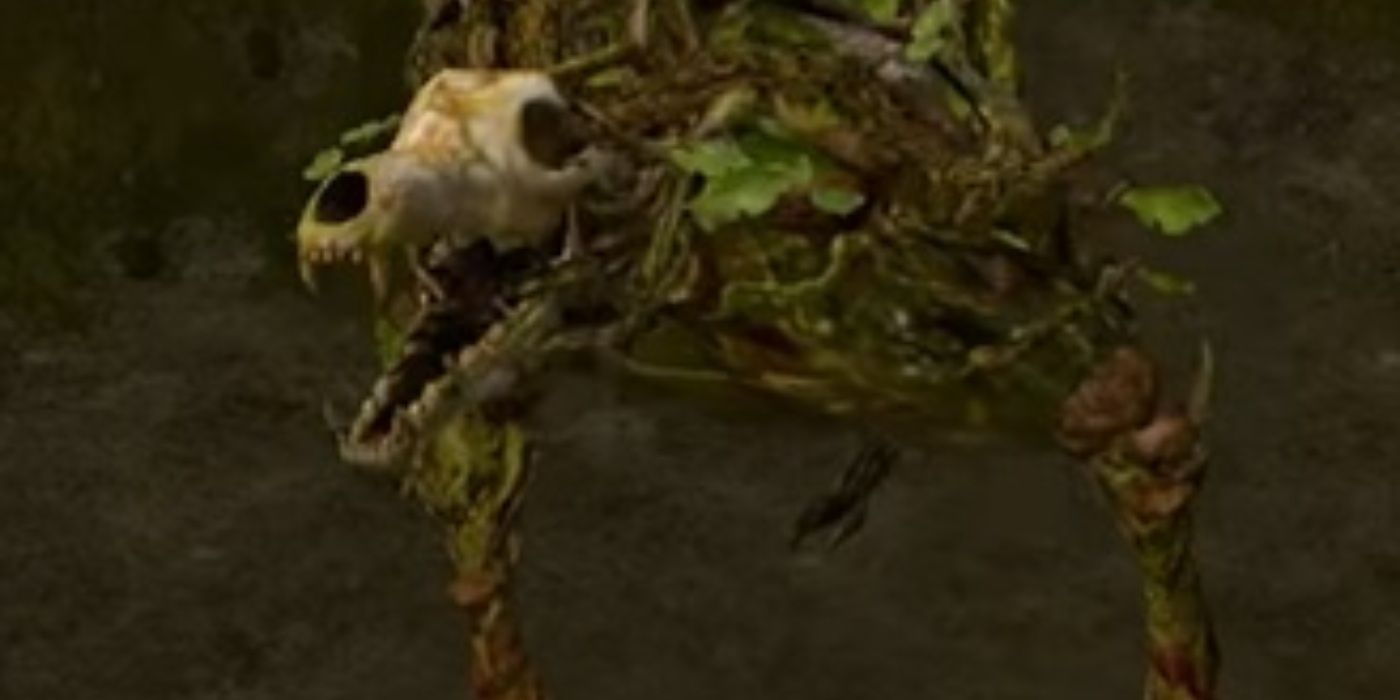 Leshen hounds also only exist in Monster Slayer. Much like their spriggan hound kin, they can be found in forested areas or away from human settlements. Additionally, if you’re looking to hunt a few, your best chance is to go out in the day, especially when it’s raining.

These one-skull creatures are stronger than spriggan hounds, so you may want to use relict oil and, at the very least, a thunderbolt potion. You can defend yourself with Quen, but these creatures — since they are comprised of plants and vegetation — are predominately vulnerable to fire, which means casting Igni. Strike with steel and strong attacks. 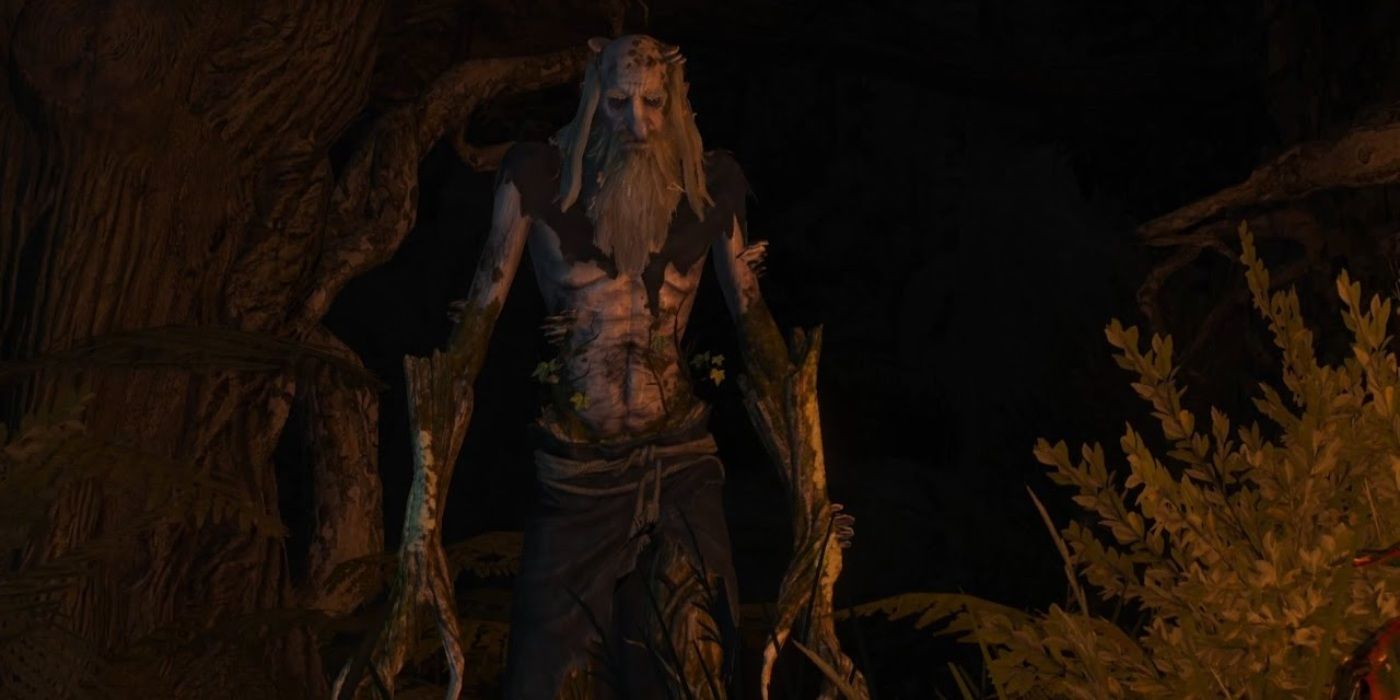 Where you find spriggan hounds, you may just encounter an actual spriggan. Spriggans are a subspecies of leshen. In The Witcher 3, you’ll find them old caverns or deep in the forests of Toussaint in the Blood and Wine expansion. They don’t usually attack unless provoked, so be wary in ancient places when harming plant life. Spriggans may not be as strong, but unlike leshy, they’re fast.

These creatures are vulnerable to dimeritium bombs, steel and Igni. In Monster Slayer, you’ll want to strike at them with strong attacks, with a dimeritium or Dancing Star bomb tossed in. They are one-skull creatures, so you won’t have too much to worry about if you’ve got a decent sword and the all-important relict oil, though even basic oil will help.

Leshen are ancient spirits that stand guard over old forests. They were introduced in CD Projekt Red’s video game series where they often appear with a deer skull as a head and tree-like limbs. They appear to possess full control over both flora and fauna and are often accompanied by packs of wolves and murders of crows.

When fighting them in The Witcher 3, Geralt must prepare to dodge when a leshen strikes the ground with its arms, as roots will burst forth at surprising speed, doing significant damage. Thankfully, leshen are slow otherwise, so focus on dodging their claws and striking quickly. Leshen can also turn to smoke and reform elsewhere. A dimeritium bomb or moon dust bomb will help prevent this. Be sure to use Igni, as it will damage the leshen and potentially stun it.

You won’t have to worry about most of this in Monster Slayer. Leshy should be fought using strong attacks with a steel sword and a grapeshot or Dancing Star bomb. You can protect yourself with Quen or harm the beast using Igni. 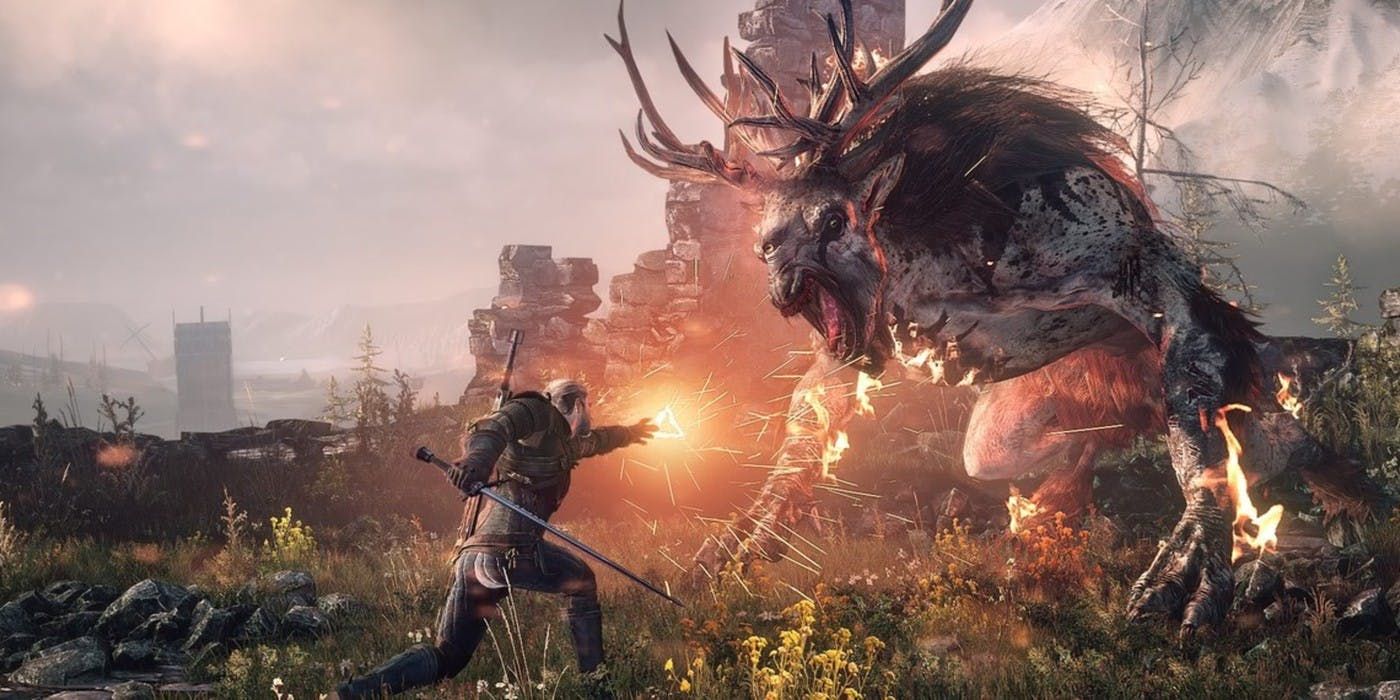 These mountainous beasts keep to old forests, swamps and bogs far from human settlements. When wandering or lost travelers encounter one, their doom is certain. Fiends are fast, powerful creatures armed with muscle, antlers and teeth. Their third eye can hypnotize an opponent and stun them and if anyone does manage to wound a fiend, their regenerative abilities will take care of it in an instant.

Fiends are impervious to Aard in The Witcher 3, though it may interrupt the beast when its using its third eye on Geralt. Enhanced Cat and Superior Cat potions potions will provide Geralt with complete immunity to the eye. Otherwise, get behind the beast, where it can’t block your attacks, and use the firestream form of Igni if you can. Relict oil is a must, as is the Quen sign. Dancing Star bombs may help. They do charge when at a distance, so if you can’t keep close, prepare to dodge when they paw at the ground.

In Monster Slayer, fiends should be dealt with using strong attacks. Again, it’s best to arm yourself with Quen whenever possible. A basic bomb may help with these one-skull creatures. For the rare tiger fiends, you’ll also want a decent set of witcher armor too. 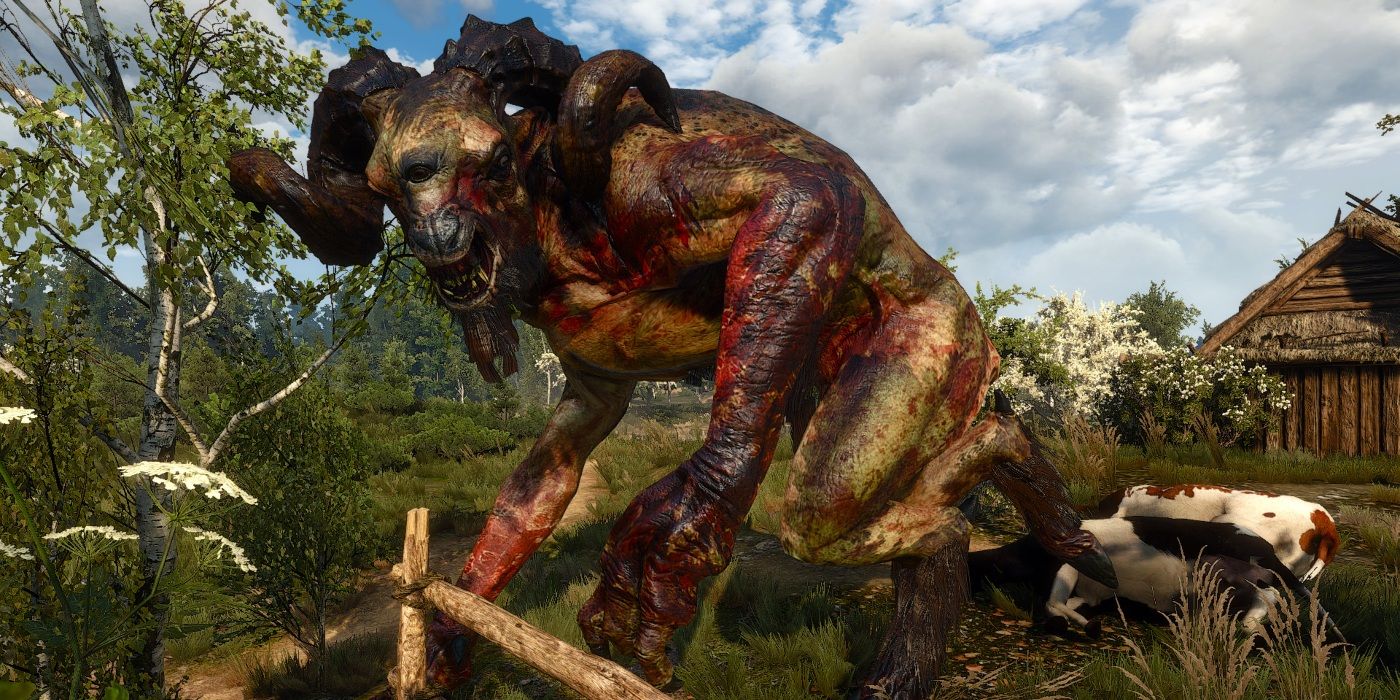 Chorts are smaller than fiends, but just as (if not more) powerful. You can tell them apart by the horns on their heads, resembling those of a ram. Like fiends, these creatures dwell in old caves and forests, far from human activity. They are not armed with a hypnotic third eye — just a regular one — and so rely on claw strikes or charge attacks. A witcher won’t have much luck taking this creature head on.

In The Witcher 3, these creatures can be found around Velen. The best way to defeat one is to bait it into charging into a wall and duck out of the way. Because of the beast’s size and weight, it won’t be able to stop itself and will crash headfirst. While it’s dazed, Geralt must move it to attack. Additionally, if Geralt is equipped with a Devil’s Puffball, he could bait the chort into charging through the gas, poisoning it and making the fight much easier.

Neither of these are options in Monster Slayer. Instead, players will have to is stick to Quen, use strong attacks with a steel sword and toss a few bombs at these two star monsters. Dimeritium, Dancing Star or a couple of basic bombs will do. 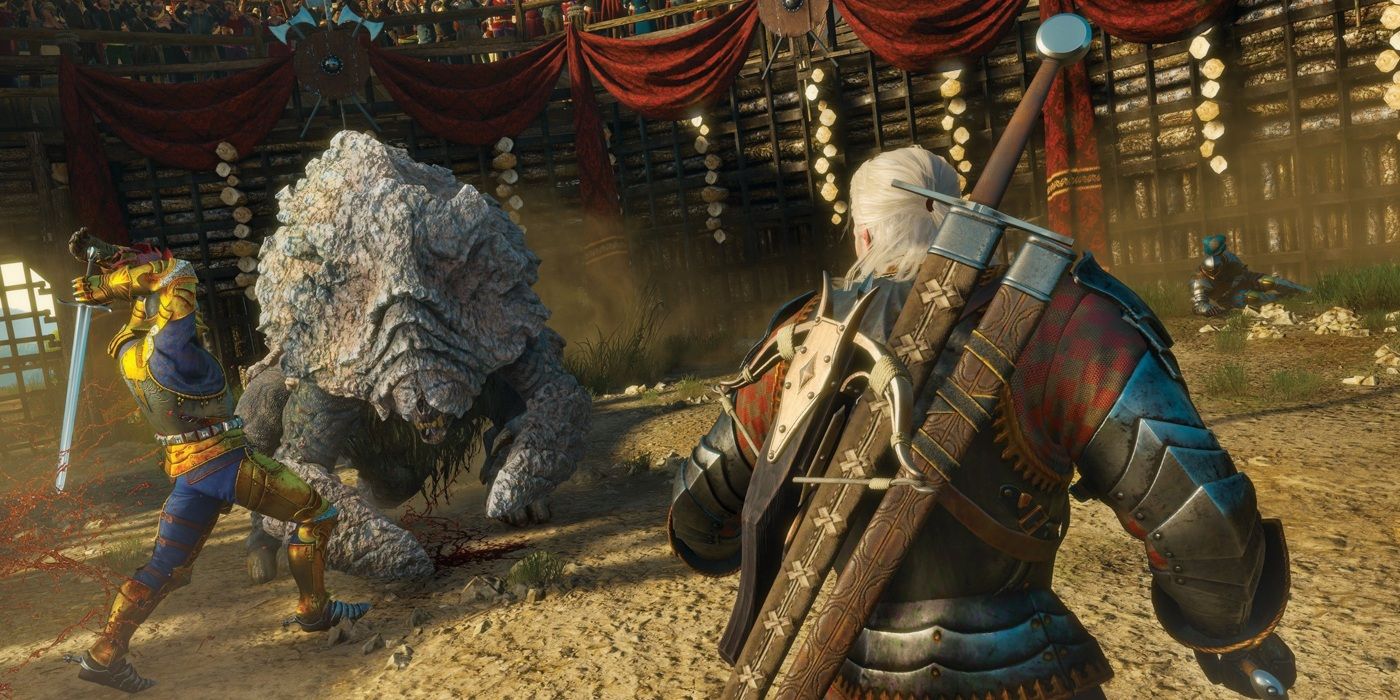 These massive, blind creatures can be found in Toussaint in The Witcher 3, through the Blood and Wine expansion. They are extremely difficult to battle thanks to their thick hides, which is why the people of Toussaint and the rest of Nilfgaard capture them for battle in arenas against gladiators. They usually reside underground, only occasionally wandering above.

Shaelmaars attack by rolling up into a ball and slamming into their opponent. They are also capable of spinning into the earth at high speeds, causing damage to everyone around them. From a distance, shaelmaars can smash the ground the cause targeted shockwaves. Use Quen and stick to dodging their rolling attacks, forcing them to crash. Whey they’re on their backs, attack their vulnerable bellies. A blast of Igni may help expose its vulnerable stomach. Axii can stun the creature, but its vulnerable spot won’t be exposed. Use Aard or a bomb to bait the creature.

They are much more common in Monster Slayer, and you won’t have to go underground to find them. Find them in meadows, forests or other areas far from urban life. You’ll need relict oil and a steel sword to fight. They are vulnerable to kinetic energy, so use Aard, Grapeshot bombs or Dancing Star bombs to help. 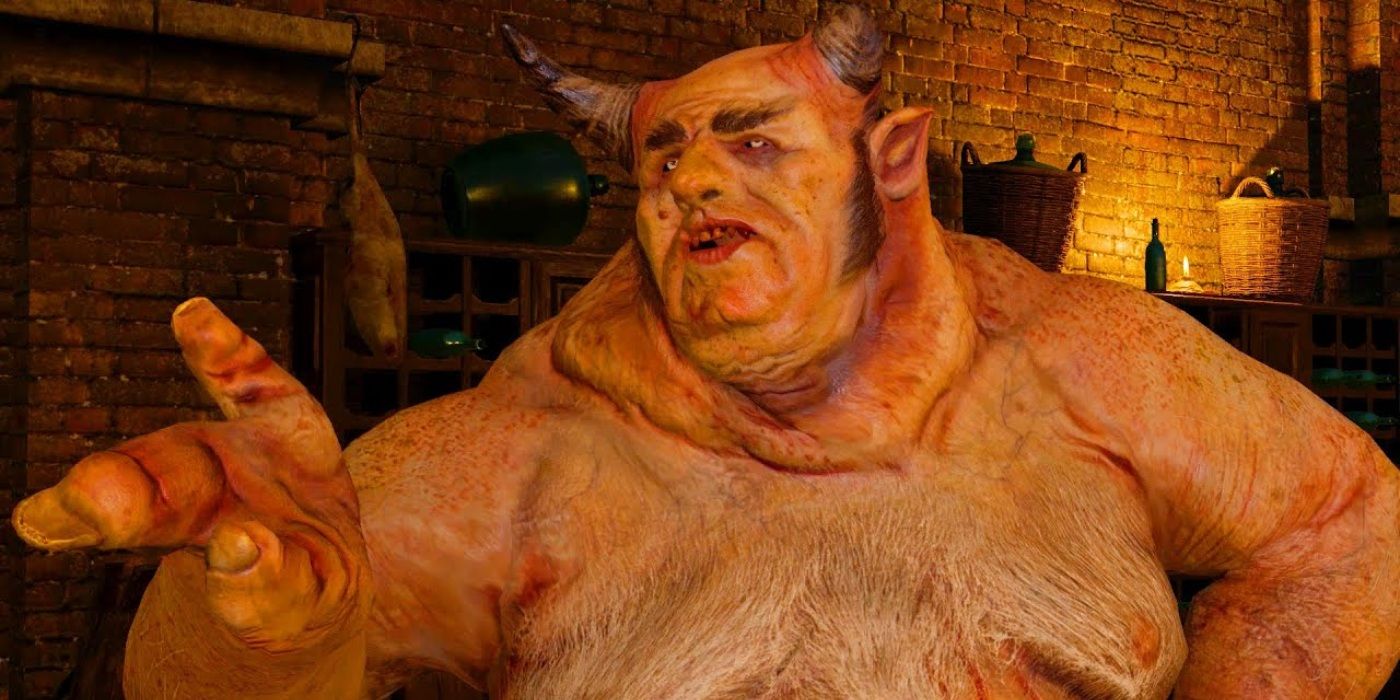 Unlike the other relicts mentioned here, Sylvans are intelligent creatures capable of carrying a conversation. They were introduced in Sapkowski’s The Last Wish and possess a distinct, goat-like appearance, though they walk on two legs and often speak both Common Speech and Elder Speech. They are known by many names, including deovel or faun. They’re mischevious creatures but very rarely harmful. Especially in The Witcher 3, where Geralt can solve a sylven problem through conversation.

Unfortunately, there’s generally no talking down a sylvan in Monster Slayer. These one-skull monsters are strong, but with the right equipment, they aren’t too difficult. A strong attacks with a steel sword and a blast of Igni will do a good bit of damage. A basic bomb or two will ensure you succeed in this fight, as will a relict oil and a thunderbolt potion, though it’s not necessary to equip all three. You’ll find sylvans in suburban areas, around forests or anywhere else far from human settlements.