One Piece: Luffy Regains His Powers (Just in Time for His Execution)

You Are Reading :One Piece Luffy Regains His Powers (Just in Time for His Execution) 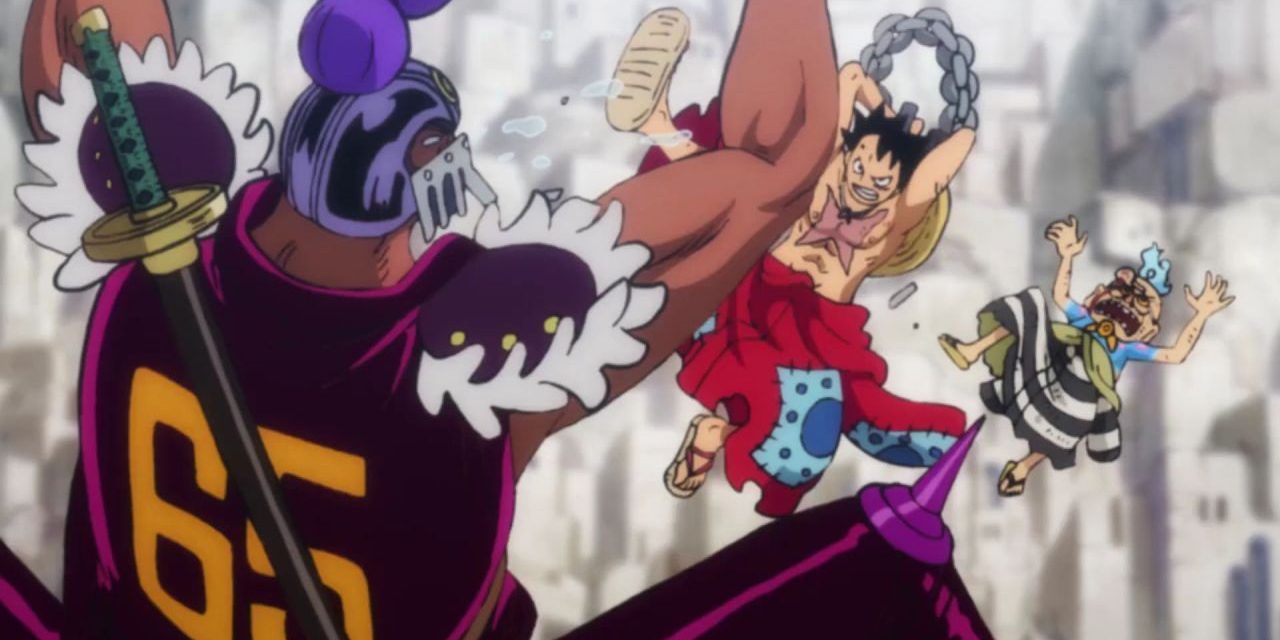 WARNING: Spoilers for One Piece Episode 931: “Climb up! Luffy’s Desperate Escape!” now available to stream on Funimation, Crunchyroll and VRV.

Luffy has spent several episodes following his confrontation with Kaido locked and imprisoned in a jail cell. With only Eustass Kid and an old yakuza boss named Hyogoro as his sole companions in the prison, he’s been forced to do manual labor. For a pirate empowered by the Gum-Gum Fruit, this labor doesn’t sound so terrible, but there’s one deadly catch.

All prisoners inside the prison have special cuffs that suppress any Devil Fruit powers or special abilities, bringing their strength down to the level of mere mortals. Still, Luffy, not to be restricted by ideas like “rules,” has managed to excel beyond all limitations and display immense power, despite the limiters. In a twist of fate, however, Luffy has managed to have his cuffs removed. However, there is one catch: in order to escape, he’ll have to survive his own execution. 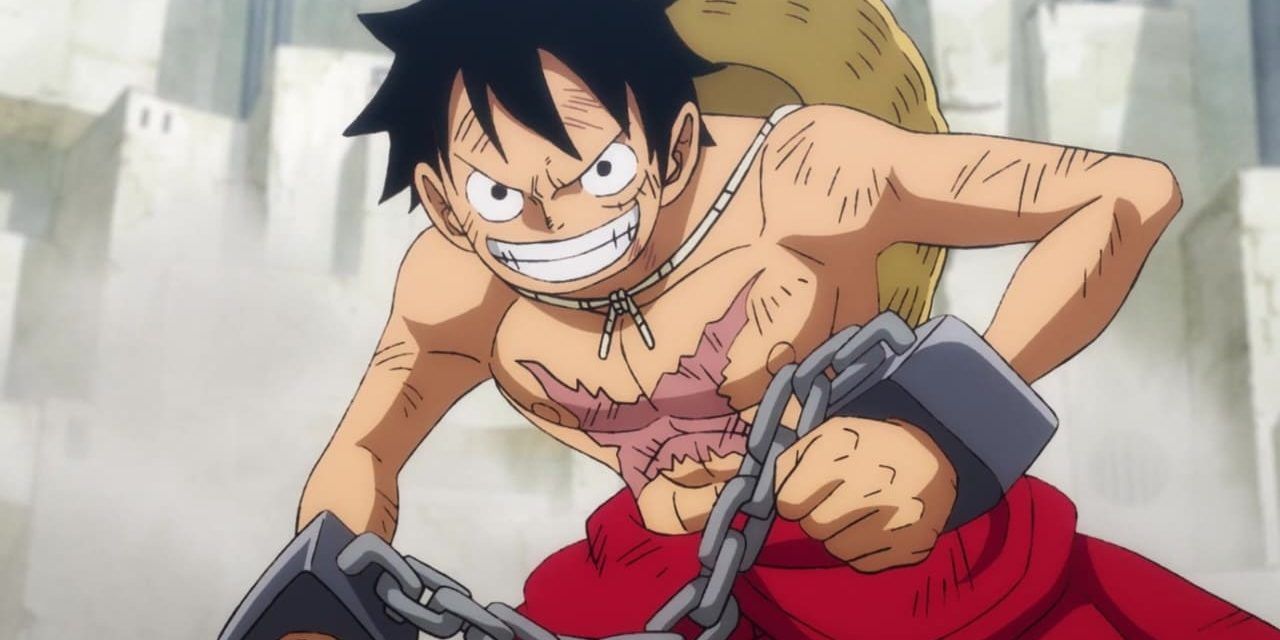 Last episode, Luffy and old man Hyogoro tried to climb a wall to escape from prison. However, this attempt ended in failure when the entire body of guards under Kaido’s control converged upon the powerless Luffy and Hyogoro. They did not manage to defeat the legions of soldiers but were rather brought before Queen, one of the main enforcers under Kaido.

However, Queen, admiring their skill, gave them the option to join Kaido’s crew — to which both Luffy and Hyogoro refused. Naturally impressed by their tenacity and skill, however, he offered a unique means of execution for the both of them, one that left the door open for new employment in Kaido’s crew. Both Hyogoro and Luffy are given cuffs around their neck, which respond to the limits of a sumo wrestling ring.

Should Luffy or Hyogoro be pushed outside the ring, the cuffs will unleash a series of blades that will chop their heads clean off. However, if they survive the onslaught of enemies thrown against them, they might be able to leave with their lives in-tact. Oh, and Luffy’s powers? They’re restored. Queen removes Luffy’s cuffs so he might better fight against the opponents. However, he’ll have to fight as a tag-team with Hyogoro, who is far smaller and weaker than him. 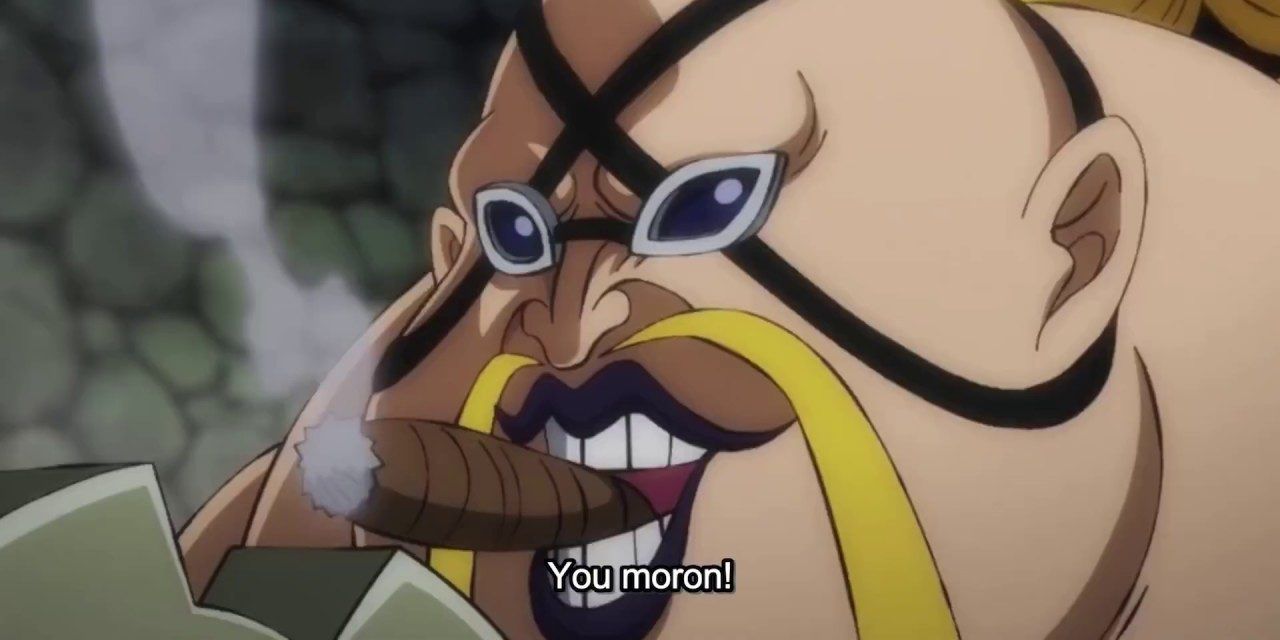 Luffy, however, seems eager for this deal, but makes one special compromise: he wants one fight: between himself and Queen. If Luffy can beat the heavy-set pop-star pirate, then Luffy can be free — that is, assuming Queen agrees to these terms.

Hyogoro, however, seems uncomfortable with the whole set of circumstances. He has already resigned himself to his fate, but fears that him being on Luffy’s side will only prevent the straw hat pirate from doing what needs to be done in order to win his freedom. It’s possible that he might throw his end of the match to avoid being in Luffy’s way — or that Luffy might put himself in danger by trying to protect Hyogoro.

Regardless, this might very well be Luffy’s greatest chance at escaping the prison alive, assuming that the rest of the prison agrees to Queen’s terms. It’s highly possible the situation might take a turn for the more complicated, since Raizo still has keys to the power-suppressing cuffs. Knowing Luffy no longer knees the keys, Raizo might, while everyone’s attention is on Luffy and Queen, free Kawamatsu, an enigmatic prisoner kept deep in the hidden bowels of the cell blocks.

Time will tell whether Queen agrees to Luffy’s terms or not, but one thing is clear: Luffy is close to breaking free.