“Fear the Walking Dead Recap”: Survivors Eat Their Own Tails in “Ouroboros”

Despite hitting beats we’ve already seen on “The Walking Dead,” tonight’s episode stands apart thanks to a drastic uptick in action.

You Are Reading :Fear the Walking Dead Recap Survivors Eat Their Own Tails in Ouroboros 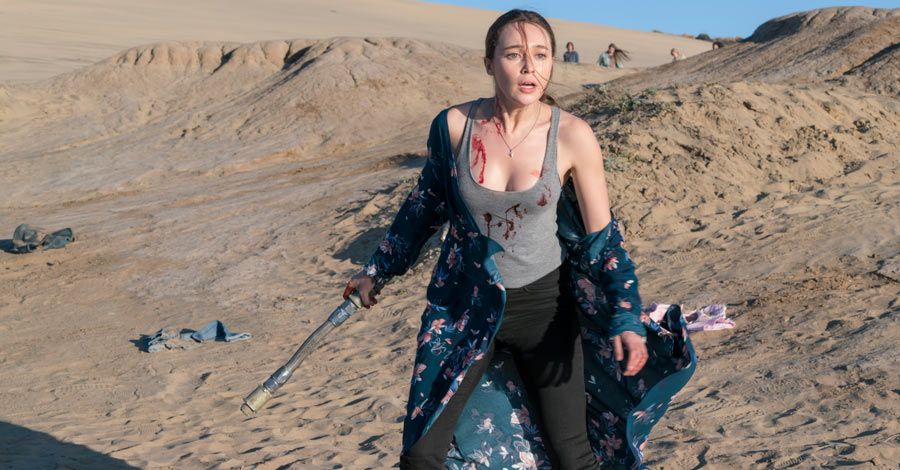 The metaphor in the title of “Ouroboros,” tonight’s episode of “Fear The Walking Dead,” is a clunky one that we’ve seen before; the image of the snake that eats its own tail a slightly more elegant version of “But we’re the walking dead.” But despite the familiar themes — namely humans having to be more cutthroat in this new post-apocalyptic world — the episode feels fresh, thanks to a drastic uptick in the action that feels rare for “Fear The Walking Dead.”

Much of it comes courtesy of the return of Flight 462, which, when we last saw it in its own web series, was plummeting to the ground. In “Ouroboros,” we discover that it’s crash-landed on the beach, and the handful of survivors have taken to the ocean in a raft. The flimsy vessel includes Charlie, a severely burned Jake and a couple of dudes who make the mistake of wanting to get rid of the injured teenager, viewing him as nothing more than dead weight.

Charlie, as tough, protective and badass as we saw her in the webisodes, dispatches them with no questions asked, all in the name of keeping Jake — a kid who will most likely die — alive. In that sense, she and Strand are on opposite sides of the same coin. Both are ruthless and capable of making mortally consequential snap judgements, but where Charlie does so in the name of empathy, Strand does so in the name of logic. By the end of the episode, when the rest of the crew seemingly convinces him to let the two airline passengers tow behind the boat in their raft, he swiftly severs their line, casting the two strangers out to sea. It’s easy to dismiss Strand’s actions as cold, but as I said, they come from practicality, not cruelty. Charlie kills to keep human connection alive and Strand cuts people off to ensure the survival of his own reluctant team. Once again, this isn’t new ground, but the aforementioned violence — in a season that’s been fairly quiet so far — gives us enough of a jolt in the first half of the episode that we forget about how old-hat the story beats might be. When the rest of Strand’s vessel comes across the airline wreckage, Chris learns a hard lesson when he finds a nearly dead passenger still strapped to his seat. After seeing a vertebrae sticking out of the man’s back, he knows there’s no hope, and ends up killing his first non-Walker human to put him out of his misery. As acted by Lorenzo James Henrie, his struggle feels raw and real enough to erase any sense of familiarity. Elsewhere, we get the largest survival horror set-piece of the season when, while scavenging the luggage of Flight 462, Nick, Alicia, and the others get swarmed by walkers making their way across the sand. Nick stumbles into a trap and — like Rick and co. on the original “The Walking Dead” — accidentally discovers that zombie gore allows him to walk freely among the undead. This has happened before. The snake has eaten its own tail before, and it will do so again. But if “Fear The Walking Dead” is able to energize its story and tone as it did tonight, the meal will be thrilling nonetheless.