In Doctor Strange: Damnation, Stephen Strange is trying to save the souls of Las Vegas. But now, things have gotten much more complicated…and demonic.

You Are Reading :Doctor Strange Damnation Turns the Sorcerer Supreme into [SPOILER] 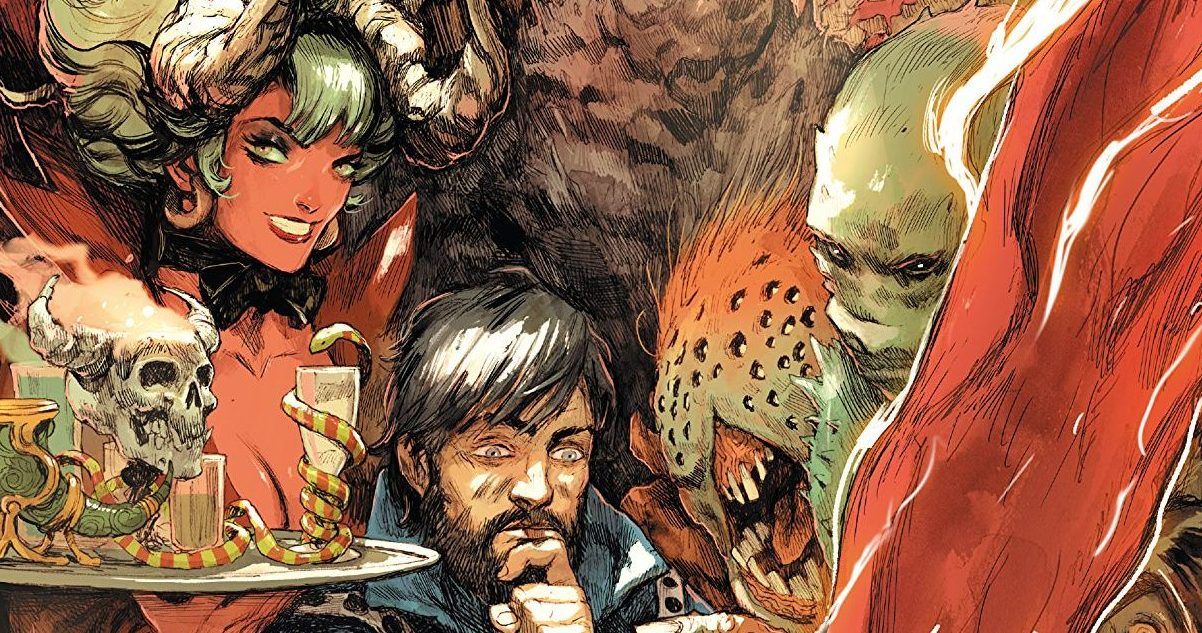 Given the lofty title of being Sorcerer Supreme, Stephen Strange’s life has had its fair share of fortune and misfortune. Now that he’s got his mojo back, he decided that the best way to use his returning magic power was to resurrect those who died in Las Vegas in the opening of Secret Empire. Of course, that didn’t go so well: Mephisto brought Hell to the city to reacquire the souls that dropped into his lap, and he did it by having all the humans that perished in Vegas just act on their base impulses, and the sins committed returned them to Mephisto’s collection. Stephen was warned about the cost of using magic of this magnitude, and sure enough, he’s definitely on the process of paying that debt–with interest.

But first, let’s back up a bit to Doctor Strange #386. To save Sin City from…well, itself, basically, Stephen challenged Mephisto to a game of cards. If Stephen wins, the city is saved, and if not, his soul is forfeit, since the villainous demon has been coveting that one for a while now. While playing “Brimstone Blackjack” for the fate of an entire city, Stephen decides that the smartest course of action for such a monumental game is to cheat his way to victory. Suffice it to say, he suffers the same fate as any cheater in Vegas: he gets the crap beaten out of him.

And to make matters worse, he gets his legs broken by Thor, one of several Avengers who’ve been turned into Ghost Riders thanks to being trapped in Vegas with the citizens. 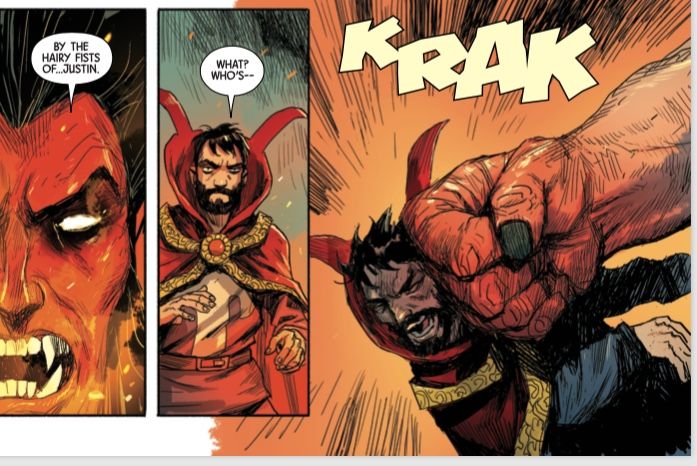 As Damnation’s second issue opens, Stephen’s convinced that no one is coming to help him out of his current jam, but there definitely is. Namely, his former partner Wong and ghost Bats, who have embarked on a short journey to acquire some heroes who can help the two of them save Vegas: Blade, Iron Fist, Elsa Bloodstone, Brother Voodoo, Man-Thing, Moon Knight (or rather, his alternate personality Mister Knight), and Ghost Rider Johnny Blaze.

Blaze in particular isn’t too happy about being interrupted from getting vengeance for a recently dead little girl–he thinks that Stephen “is due an ass-kicking,” and has been for years–but joins when he hears what Mephisto has done to Vegas. Despite how different all of them seem, they’ve all died in the past, been damned, or carry heavy amounts of darkness within them. To Wong, that makes them more than ideal to save Stephen and take down Mephisto.

The instant the ragtag heroes arrive in Vegas, they’re attacked by the Las Vegas citizens that have been turned into demons. At Wong’s behest, they’re allowed to do anything but kill the citizens, but the demons and Avenger Riders have no such hangups. Thor drops her hammer on Blade, Hawkeye launches a flurry of flaming arrows, and their adventure is almost over before it even really begins. That is, until the Scarlet Spider himself, Ben Reilly, quickly comes to their rescue. With two assault rifles slung across his back, the hero offers to take the heroes to a safe place within the demonic city, his reasoning for showing up being both funny and succinct: “What? I live here.”

In the midst of their chaotic reception, Wong and Bats sneak off to go free Stephen. But when they arrive, it turns out that Stephen has undergone a bit of a change. Namely, he’s now been converted into a Rider himself. 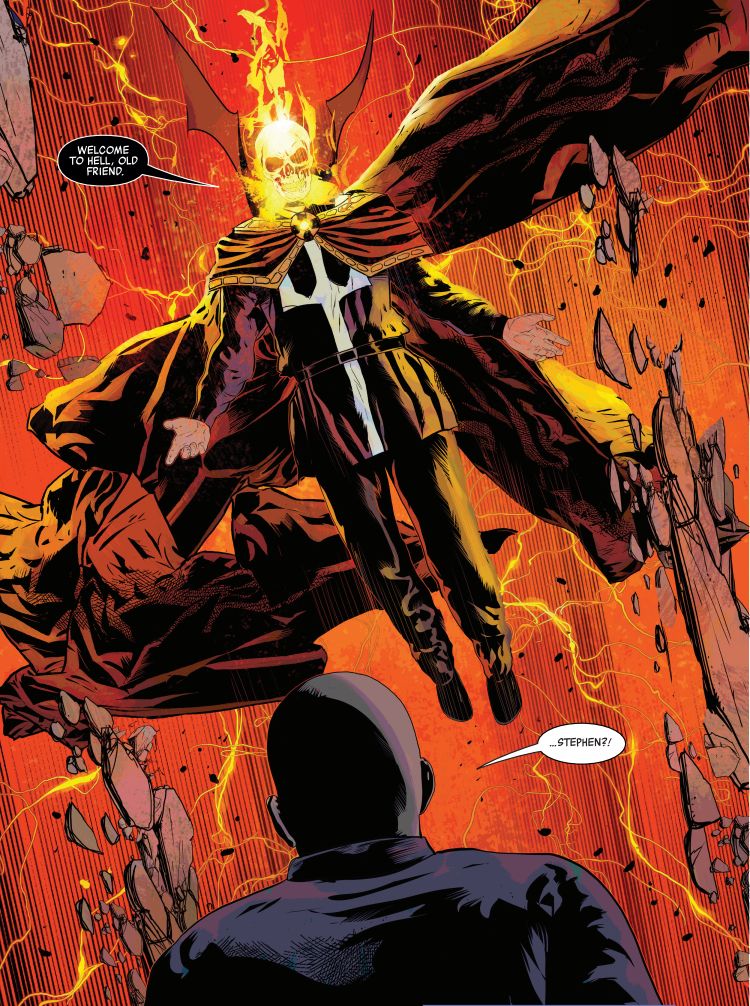 How did this happen to Stephen? That’ll be revealed next week in Doctor Strange #387, but his hellish transformation certainly complicates the mission to save Las Vegas.