You Are Reading :Carol Danvers Goes Meta to Save Alpha Flight in Captain Marvel #1 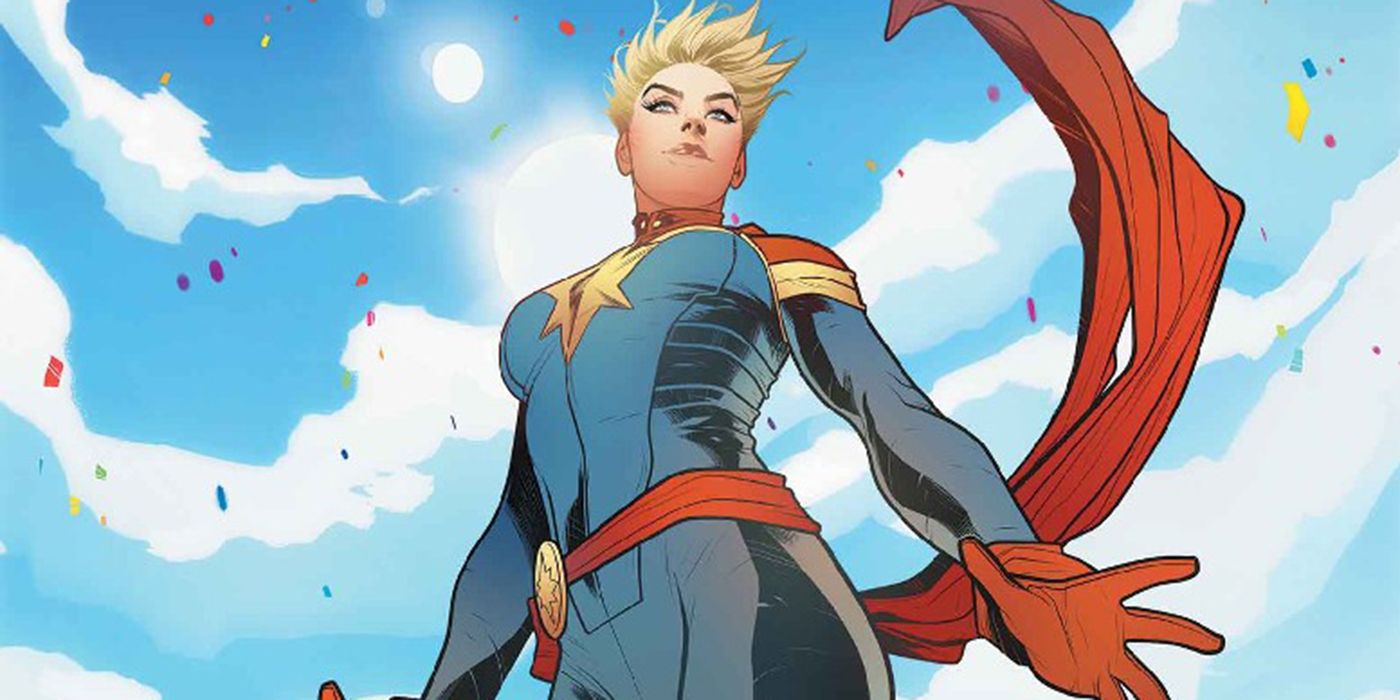 In the wake of “Civil War II,” Captain Marvel and her Alpha Flight program have gone through a change. Not only has Carol Danvers emerged from the battle more popular than ever, her space station — tasked with Earth’s defense against alien threats — has come under new management. After it was revealed that a supervillain had insidiously inserted himself onto Alpha Flight’s board of directors in the final storyarc of the previous “Captain Marvel” volume, Alpha Flight’s board has had to be restructured. “Mighty Captain Marvel” #1 by Margaret Stohl and Ramon Rosanas reveals one major change the new board has made.

The issue starts off in what appears to be Times Square with Captain Marvel fighting a new, hammer-wielding super person. It’s a not out of the ordinary scene, to be sure, but there’s one thing noticeably different from similar encounters in the past: Carol’s hair. The Captain’s been sporting a super short cut for the last year, and here she’s returned to her long locks. That’s not the only difference, either. The next page shows Carol doing something completely out of character:

Captain Marvel sporting super cleavage and making out with a random super named “Hero Man”? What is this? Well, we learn that it’s actually a television show called “Cap’n Marvel” — and it’s profits are what’s keeping Alpha Flight afloat these days. And Carol’s not too happy about it, either; that “Vomit!” exclamation from off-camera is hers.

The art then flips the “camera” around and shows what’s going on behind-the-scenes of “Cap’n Marvel.” Carol and her best friend Spider-Woman (they made up after a big fight in “Mighty Captain Marvel” #0) have stopped by the set to check in on the production, and Carol is not happy.

Jessica Drew tells Cap to look on the bright side: even if the dialogue is bad, her small screen hero will still give plenty of girls a non-princess option when it comes to Halloween. Still, Carol notes that the title “sounds like a box of cereal” and that her costume has too much cleavage. There’s a bit of meta commentary about how some real world readers reacted to Carol’s haircut and costume change a few years ago. The TV Cap’n Marvel has long hair and a more revealing costume, two things that Carol has ditched over the past few years in favor of a flight suit and close-cut hairstyle. A call from the President cuts Carol’s notes short and she has to leave the soundstage.

This isn’t the first time that Marvel heroes have had their heroic exploits turned into entertainment. In 1984, Dazzler had a feature film made about her life in the “Dazzler: The Movie” graphic novel. The Fantastic Four also had comics made about their adventures, which Reed Richards licensed out in order to help pay for the team’s endeavors. “Spider-Man/Deadpool” #6 revealed that Deadpool has his own feature film within the Marvel Universe. On the flip side, the most recent “Logan” trailer brought comics into the movies with Hugh Jackman holding in his hand the comic book adaptation of the movie X-Men’s adventures.

See also  Breaking Bad All 5 Seasons Ranked According to Critics

Unlike many of those, save for the FF example, this appears not to be a one-off joke. Instead, we’re looking at a specifically-crafted plot point designed to be a part of the series’ overall direction. While it could very easily play as a running joke in the background, it may also become a larger issue at some point down the line.

There are a few Easter eggs for Captain Marvel fans on this soundstage, too. First, “Cap’n Marvel” is being filmed on a soundstage at Wacker Studios in New York City. The studios are named after former Marvel editor and current Marvel VP of Current Animation Stephen Wacker. Wacker was the editor behind the first “Captain Marvel” series starring Carol Danvers; it was his idea to promote her from Ms. Marvel to Captain Marvel and he was responsible for putting Kelly Sue DeConnick on the book.

Secondly, DeConnick herself has a shout out on these pages. The back of a director’s chair has “DeConnick” written on it, implying that someone — perhaps the actress playing Cap’n Marvel? — shares a last name with Carol’s most famous writer. Between two volumes of “Captain Marvel” and the “Captain Marvel and the Carol Corps” limited series, DeConnick wrote 36 issues of Carol’s adventures between 2012 and 2015. 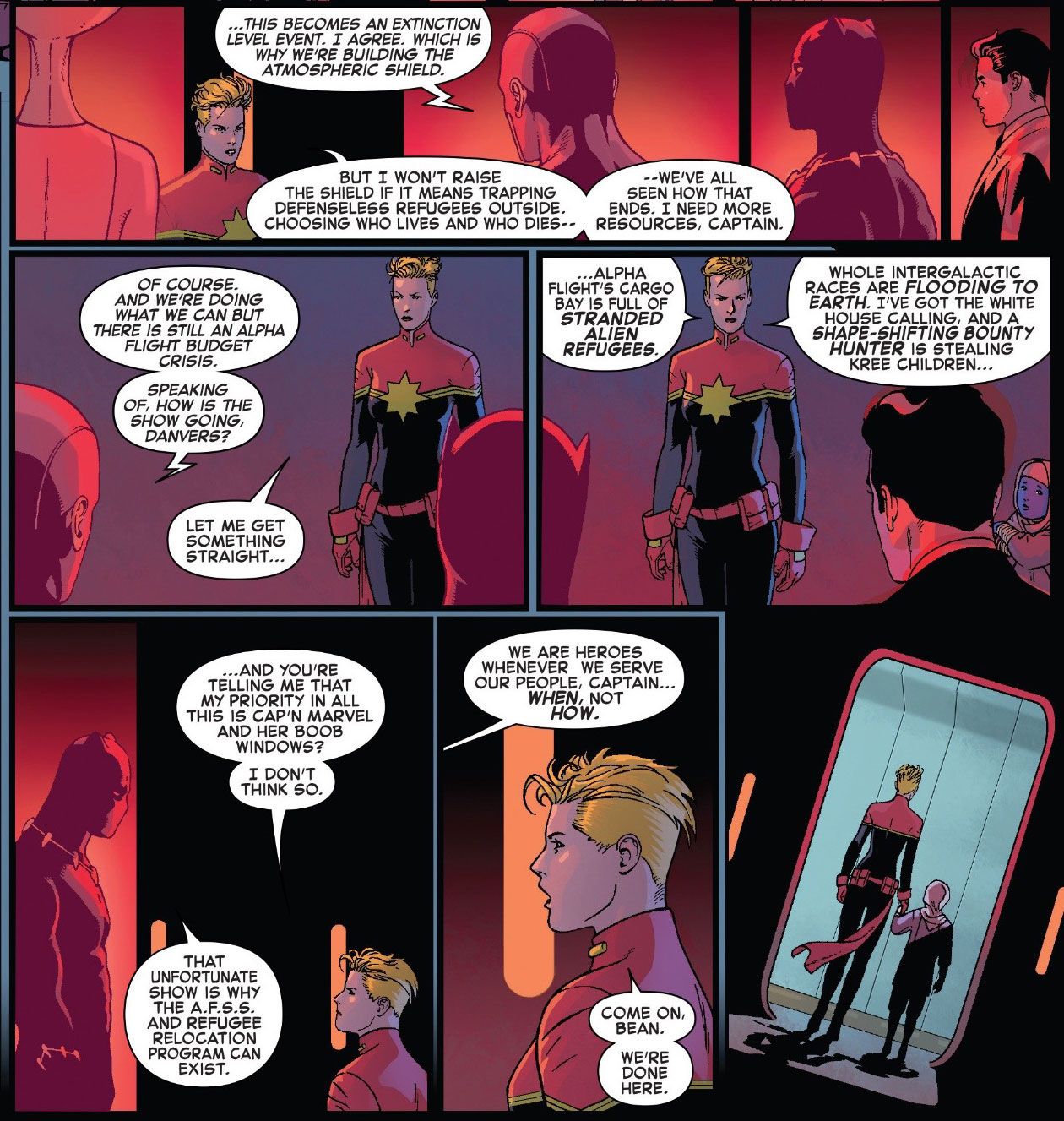 The rest of the issue sees Carol dealing with an extraterrestrial refugee crisis as aliens from other worlds flee the oncoming wave of aggressive Chitauri. That wave has also tried to attack Earth; Carol, Captain America and Alpha Flight had to team up with Quasar in order to fight off the first waves of Chitauri in “Captain America: Steve Rogers” #8. She’s later drawn into a holographic meeting with the Alpha Flight Space Station board, where they reference the building of an “atmospheric shield” that sounds similar to what Maria Hill just proposed in “Captain America: Steve Rogers” #9.

Black Panther tells Carol that that “unfortunate show is why the A.F.S.S. and refugee relocation program can exist.” It may be a bad show, but it’s funding good work, and that’s why the board cares about it. It looks like the “Cap’n Marvel” setup will be around for a while — whether Captain Marvel likes it or not.

“The Mighty Captain Marvel” #2 arrives in stores on February 15.

Brett White is a comedy writer and a proud Southern man — you know, proud of all the good stuff (Dolly Parton, Blanche Devereaux and Goo Goo Clusters). A lifelong obsession with comics led him to Wizard Magazine in 2008 and then to writing gigs for The Robot’s Voice, Marvel.com, and MTV’s Splash Page where he served as managing editor. Brett served as a writer and Assistant Editor for CBR from 2011 to 2017, where he wrote a lot about the X-Men, Foggy Nelson, and plenty of gay stuff. Brett is currently a reporter/producer for Decider, where he tries to find reasons to write about Bob Newhart (and also the X-Men). His passion for sitcoms is on full display in the weekly podcast Must Have Seen TV.