Be it in the comics or animated series, Clayface is a master of disguise. Here are the DC villain’s best and worst disguises.

You Are Reading :5 Best Disguises Clayface Has Assumed (& 5 Worst) 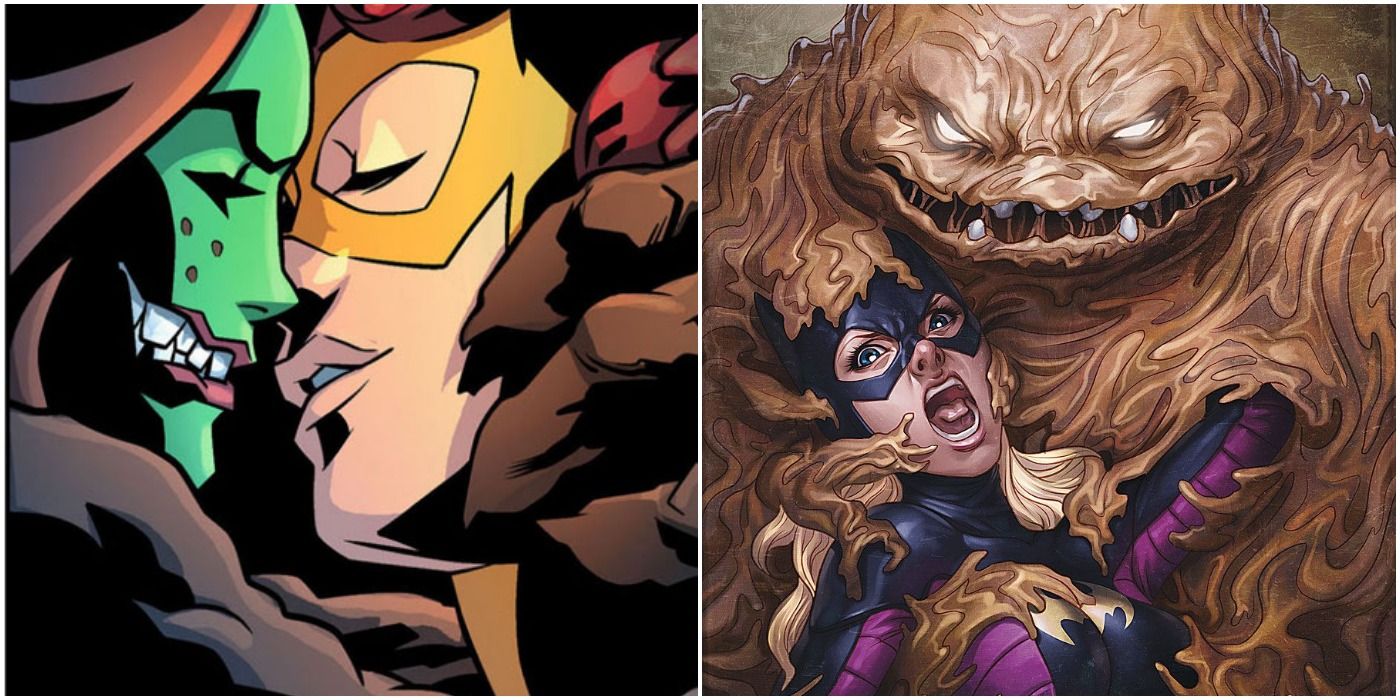 Throughout all of his incarnations, Clayface has been a master of disguise. Different stories and different versions have made him more successful than others. Many times, his physical power is emphasized, but his amazing ability to alter his appearance cannot be disregarded.

While most of Clayface’s disguises were often fantastically effective, some others were either a bad choice, in poor taste, or unsuccessful. Along with referencing several different versions from all media, this article will also be limited to the most current, widely regarded version of Clayface that is usually depicted as a hulking behemoth of mudlike, shape-shifting clay that can mimic the appearance of people. 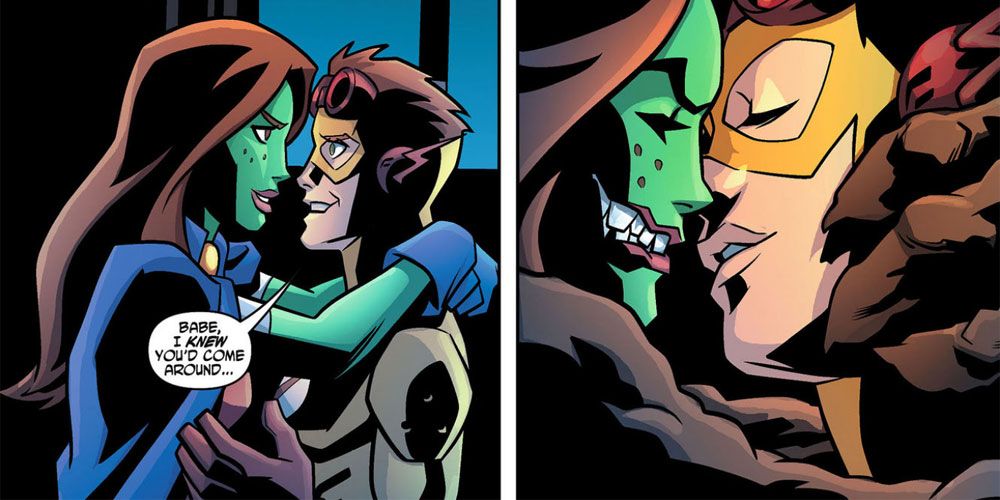 In Young Justice #13, Clayface is inside the Young Justice headquarters and proceeds to take out the team one by one. His disguise as Miss Martian first takes out Superboy. It works so well that he uses it again to take out Kid Flash by getting intimately close.

This is messed up because it exploits a potential division in the team, with Miss Martian and Superboy developing a romance. He even uses it to take out Miss Martian as Superboy. It also shows that Clayface is willing to get intimately close to a teenager. 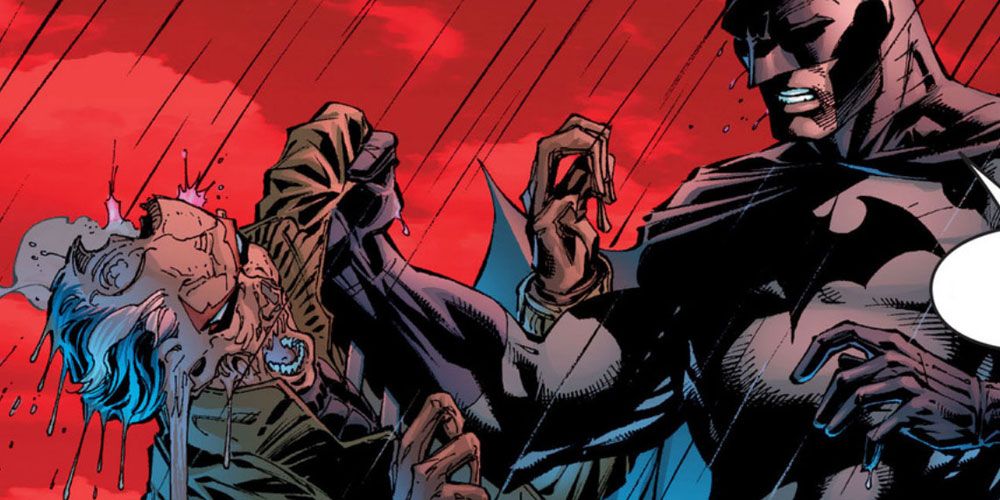 In the storyline of Batman: Hush, the return of Jason Todd was teased as part of the psychological torture of Batman. When Jason Todd was revealed as behind it, a battle and chase were started between Batman and his sidekick that he believed was dead.

Along the way, Batman realized he wasn’t fighting Jason Todd. when confronted with the truth, Clayface allowed himself to be washed away by the rain. The altercation was retconned to starting with Jason Todd and switching with Clayface, but initially, it’s one of Clayface’s best disguises. 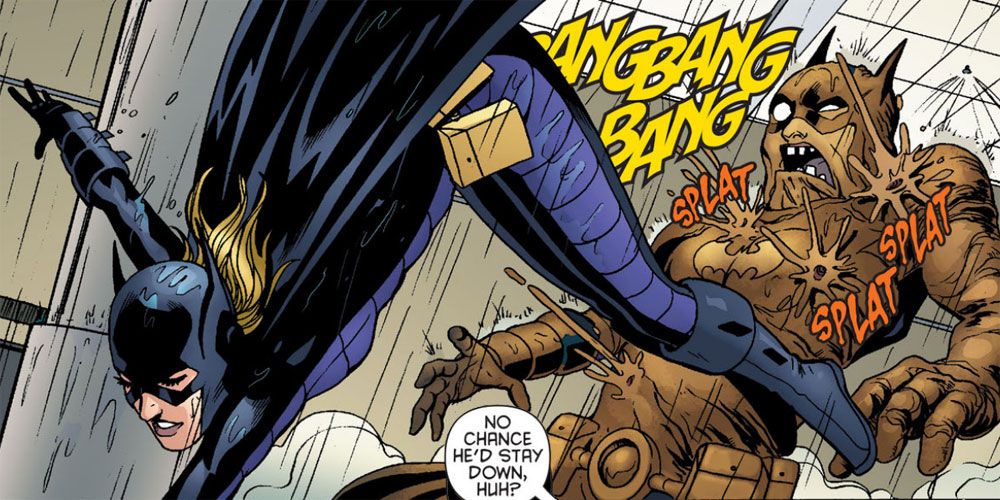 In Batgirl #13 from 2010, Stephanie Brown is Batgirl. She tails Clayface to a bank. His robbery schemes foiled despite two murders, Clayface begins to battle Batgirl from the vault upstairs into the bank lobby. To confuse the Gotham Police, led by Detective Nick Gage, he mimics Batgirl and tries the trite “shoot her, I’m the real one” number.

Stephanie instantly sees the way around this. She tells Detective Gage to shoot her because she’ll bleed. This gives her the opportunity to use the water sprinklers and her bat-gadgets to freeze Clayface in a block of ice. It was a remarkably quick way for him to go down. 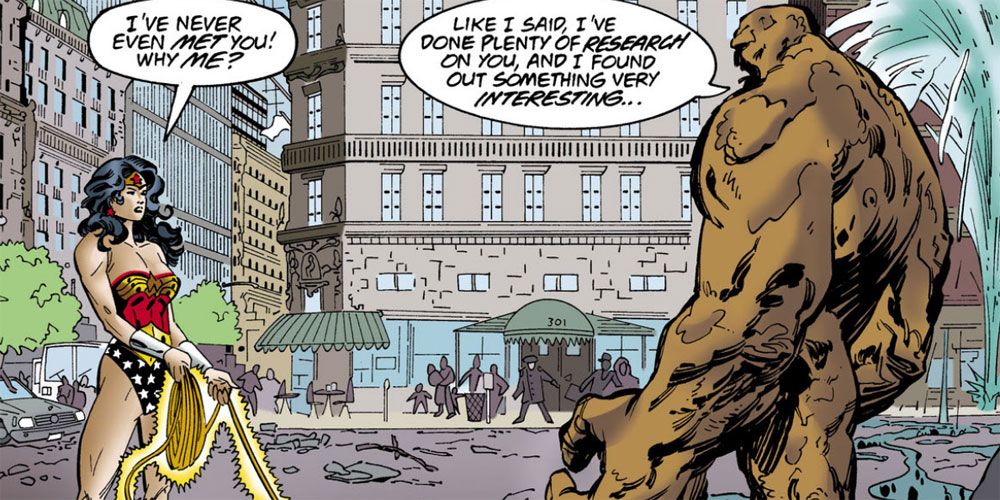 In Wonder Woman #160, Wonder Woman responds to a police standoff with Cheetah. Of course, Diana quickly realizes that this can’t be Cheetah when her foot squishes into the villain’s head. Clayface promptly reveals himself to the Amazon under the compulsion of the Lasso of Truth.

It may not seem like a successful disguise, but luring Wonder Woman was the purpose of Clayface’s Cheetah. He had done his homework and learned that Diana had been made from special clay. He was determined to absorb Diana and her power. For a short time, it worked, until Wonder Woman defeated Clayface with the help of Donna Troy. 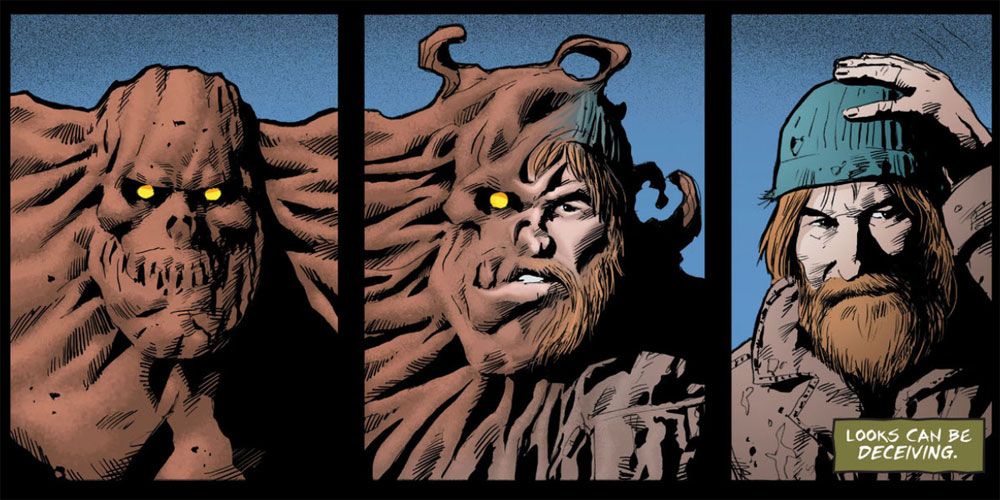 For DC Comics’ Villains Month, several villains got their own special issues. Clayface used his solo adventure to prove himself worthy of membership in the Secret Society. He also sets out to show that he has a criminal mind and not just brute strength and a temper. Another super-criminal tells him of a secret paramilitary base setting up a resistance to the Secret Society. Clayface decides to take it down for the Society.

Clayface infiltrates the base using a couple of disguises, one as a bum and another as a soldier. His techniques are to use the disguises to get close enough to make use of his power. Unfortunately, when he contacts the Society Clayface learns that the base was set up by them and was not resistance against the Secret Society. He’s called an idiot and caught in the explosion of the base self-destructing. He survives but is humiliated.

See also  DC The Most Irredeemable Heroes From The Comics 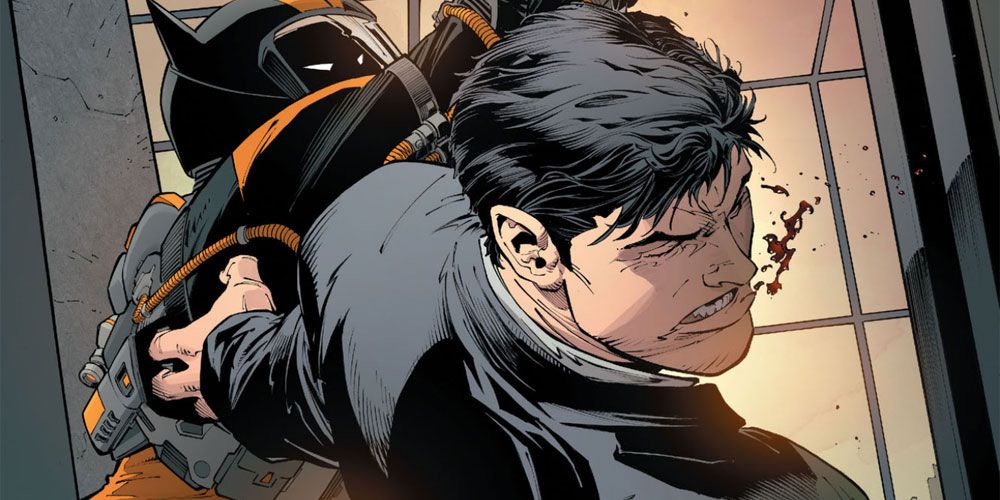 In Batman #19-20 by Greg Capullo and Danny Miki, Clayface goes on a crime spree disguised as Bruce Wayne. He did this to lure out Batman and expose his true identity. Batman eventually does stop Clayface, but for a moment, it looks like his plan is going to work.

All it takes is a touch for Clayface to replicate someone’s DNA. When trapped, he tries to mimic Batman and becomes Bruce Wayne. Batman fakes him out by using a “fiber mask” which he claims uses DNA from Bruce Wayne. Even then, Clayface almost manages to get Batman to expose himself by duplicating Damian Wayne, recently deceased. Batman goes berserk, but Jim Gordon gets the Dark Knight to reign it in. 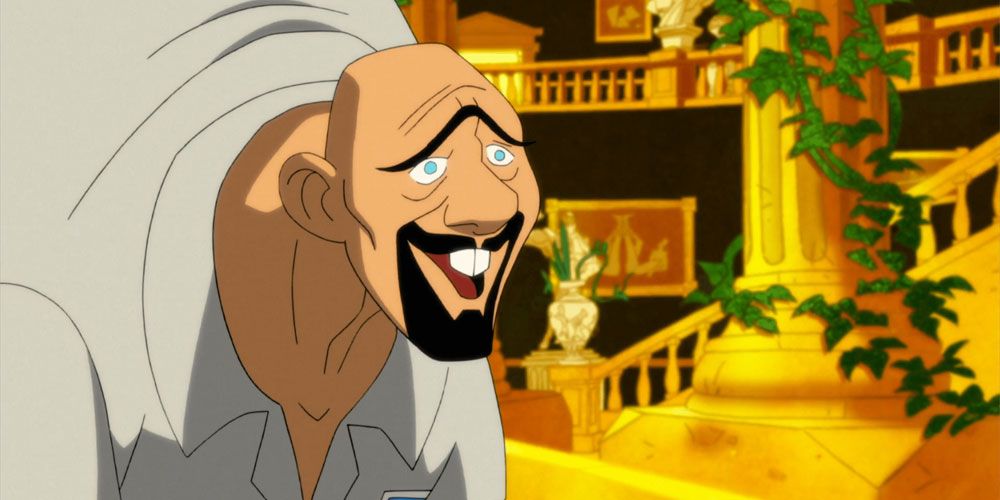 In the Harley Quinn TV series, Harley wants to get revenge on Maxie Zeus by stealing his gold. She has Clayface distract him by posing as a mailman. As a true method actor, Clayface has to give the mailman a backstory as Maxie Zeus’s long lost son. The problem is that Maxie Zeus soon recognizes Clayface’s story as being the story of Forrest Gump.

Maxie Zeus then starts dropping several things about the fictional mother of his son. He suggests Blue Eyes, a hunchback, and a lisp. Clayface instantly duplicates them all in full view. Zeus unravels Clayface’s lie and then begins to beat him mercilessly. If Harley had not shown up with Doctor Psycho, Clayface’s horrible disguise might have gotten him killed. 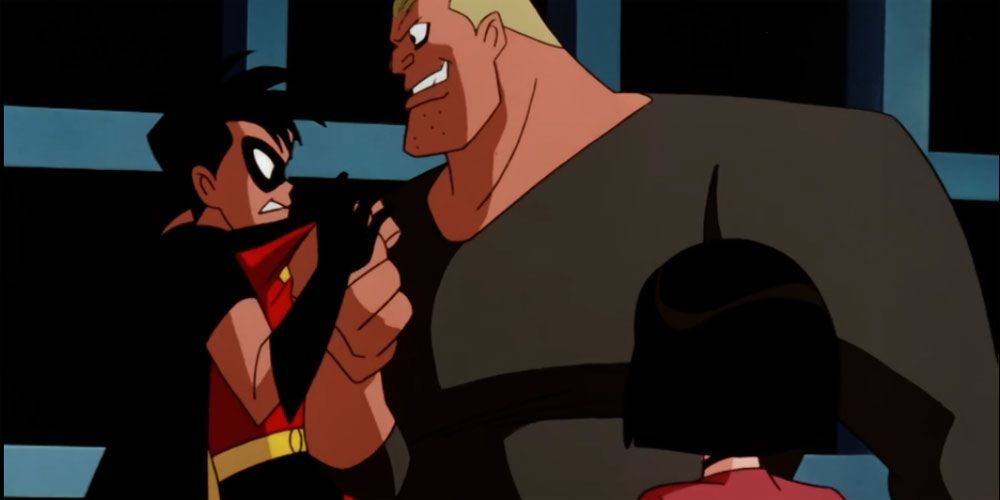 In the New Batman Adventures episode “Growing Pains,” Robin is on his own when he rescues a young girl with no memory of who she is. He later finds out that she is afraid of a large man that haunts her dreams. Robin gives her the name Annie, and he soon learns that the man after her is an unknown superhuman villain that Commissioner Gordon had alerted Batman and Robin about.

Robin puts a valiant fight to protect Annie, but it’s very futile against so strong a foe. Batman arrives and chases him off. Robin and Annie try to track down a place she vaguely remembers. Her father shows up and reveals himself to be Clayface. Annie was a part of Clayface that he sent out to scout Gotham. Clayface reabsorbs Annie and Batman rescues Robin from the villain and a well-timed explosion. 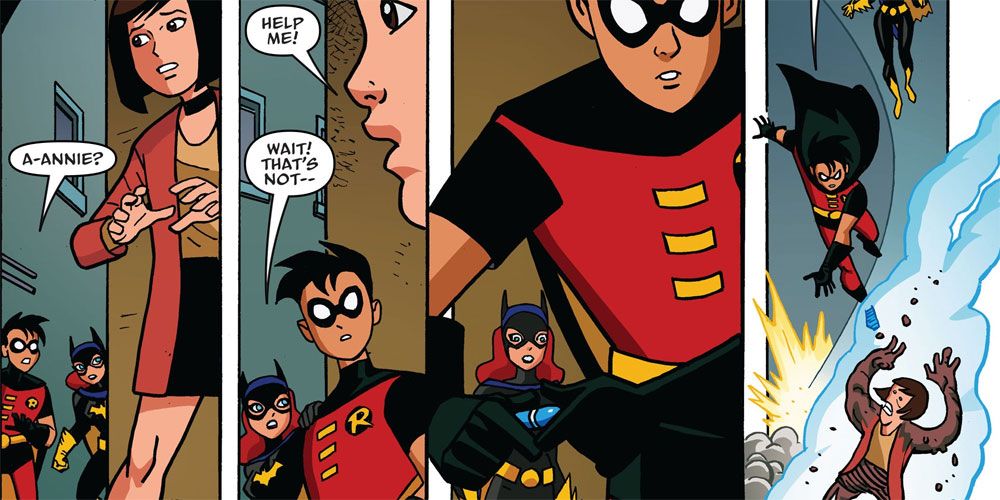 Batman: The Adventures Continue #3 is a follow up to “Growing Pains.” Batman, Robin, and Batgirl are fighting Clayface when he splits in two. When Batgirl and Robin catch up to their half of Clayface, he has taken the form of Annie. Robin freezes Clayface, angered by Clayface using the memory against him.

Clayface’s reasoning is never explored past paranoia. It’s part of a larger plot that Deathstroke has against Batman, courtesy of Lex Luthor. It rates as Clayface’s worst disguise for how it targets Robin psychologically while underestimating the hero’s capability and anger. 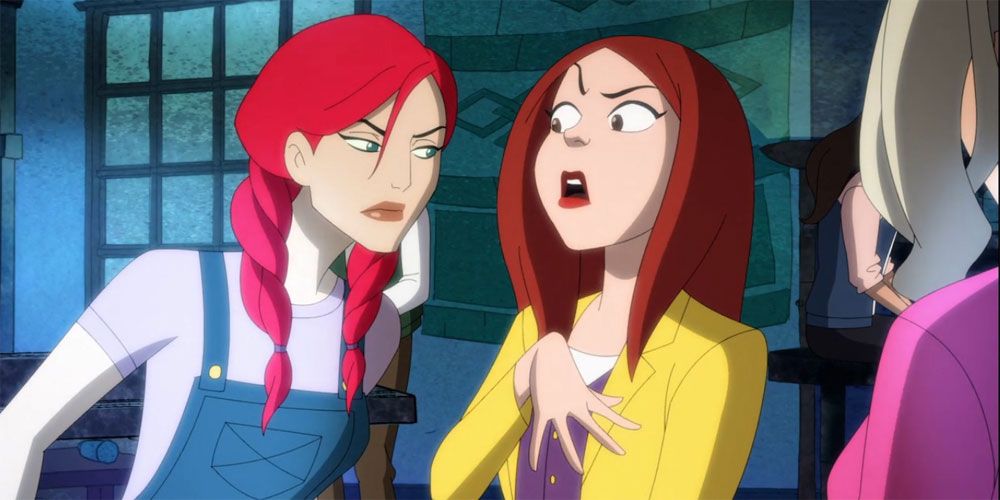 In season 2 of Harley Quinn, Gotham University is taken over by the Riddler. Harley and Poison Ivy infiltrate the campus to find that Clayface is already there in the identity of Stephanie. When he announces that he’s in a relationship with another student, Chad, the show also reveals that this version of Clayface is gay.

The role shows a side of Clayface that enriches his character. He’s longing for a relationship and finds it in the one place where he can also pursue a love of theater in the No Man’s Land of Gotham City. While the sexuality of the character is often controversial, the way that the other characters shrug it off makes it refreshing. The fact that Chad and Hunter, another student that “Stephanie” is seeing, are not aware of this girl being Clayface show how successful the villain can be when he sets his mind to it.