These great fanart pieces combine two of our favorite franchises: Pokémon and Naruto!

You Are Reading :10 Naruto Characters Reimagined As Pokémon Trainers 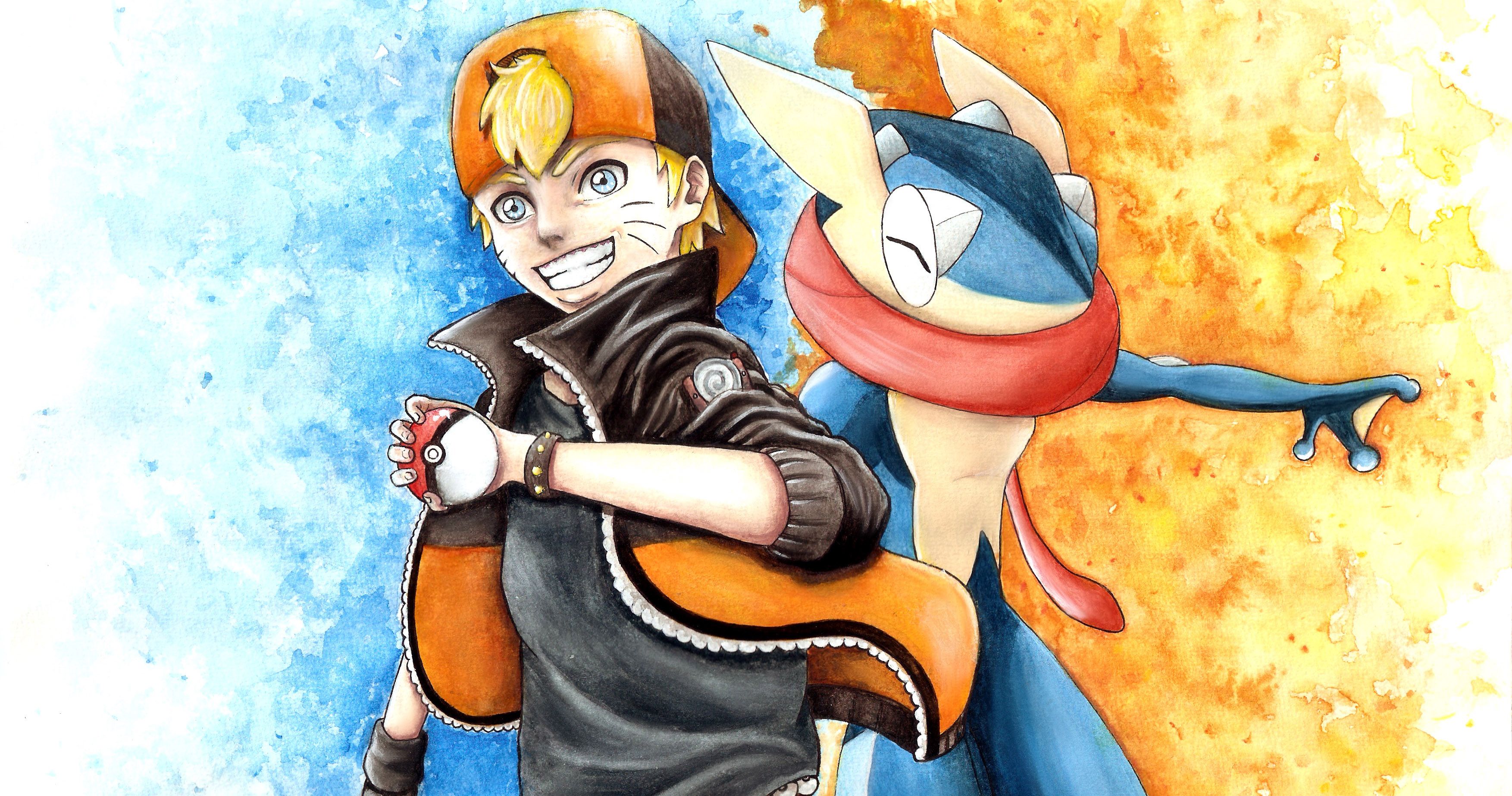 Naruto and Pokémon are two of the most recognizable anime in the world. One follows a young ninja’s quest to become Hokage, while the other centers around catching and training monsters to be the very best. If the worlds of Naruto and Pokémon were to collide, what would it look like?

Ninja would be running around battling with their Pokémon companions, Pokémon would provide assistance on secret missions, and Team Rocket might even join forces with the Akatsuki. The possibilities are endless with so many unique ninja and Pokémon to team up with. Here are your favorite Naruto characters reimagined as Pokémon trainers in ten amazing works of fan art. 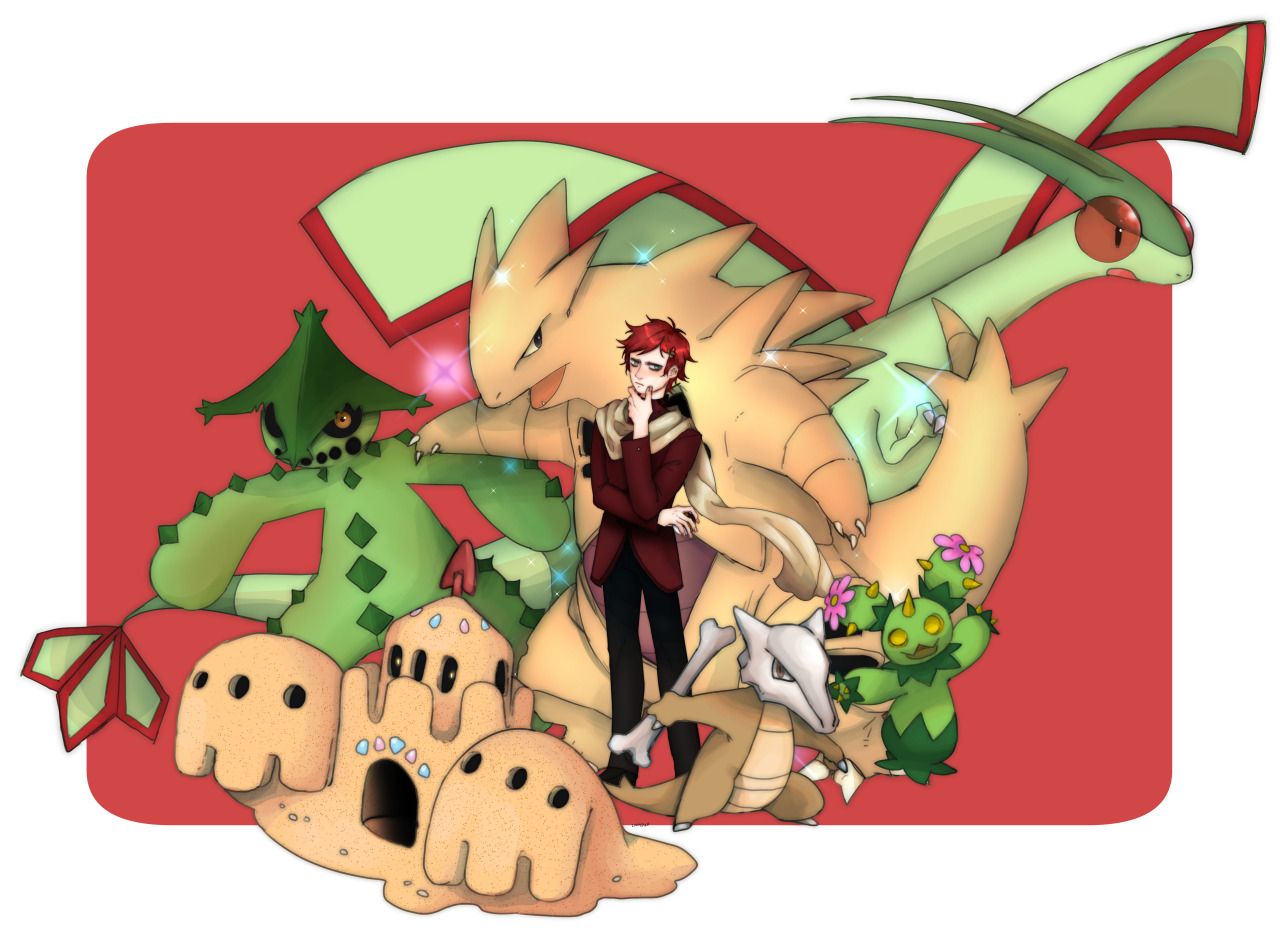 As the Kazekage of the Sand Village and talented wielder of sand, it’s clear that Gaara’s team would consist of all Pokémon found in the desert. Therefore, this stunning fan art by @lnmdavrefia1925 on Tumblr depicts Gaara with three sandy ground-types, two cacti, and a mighty Tyranitar.

Tyranitar has the ability to whip up raging sandstorms, which has perfect synergy with not only Gaara’s own control over sand but also the rest of his team. By nature, the ground-types, Flygon, Marowak, and Palossand, all thrive in the midst of sandstorms while their opponents suffer the rough conditions. The two cacti, Cacturne and Maractus, help cover the team’s water-type weakness. 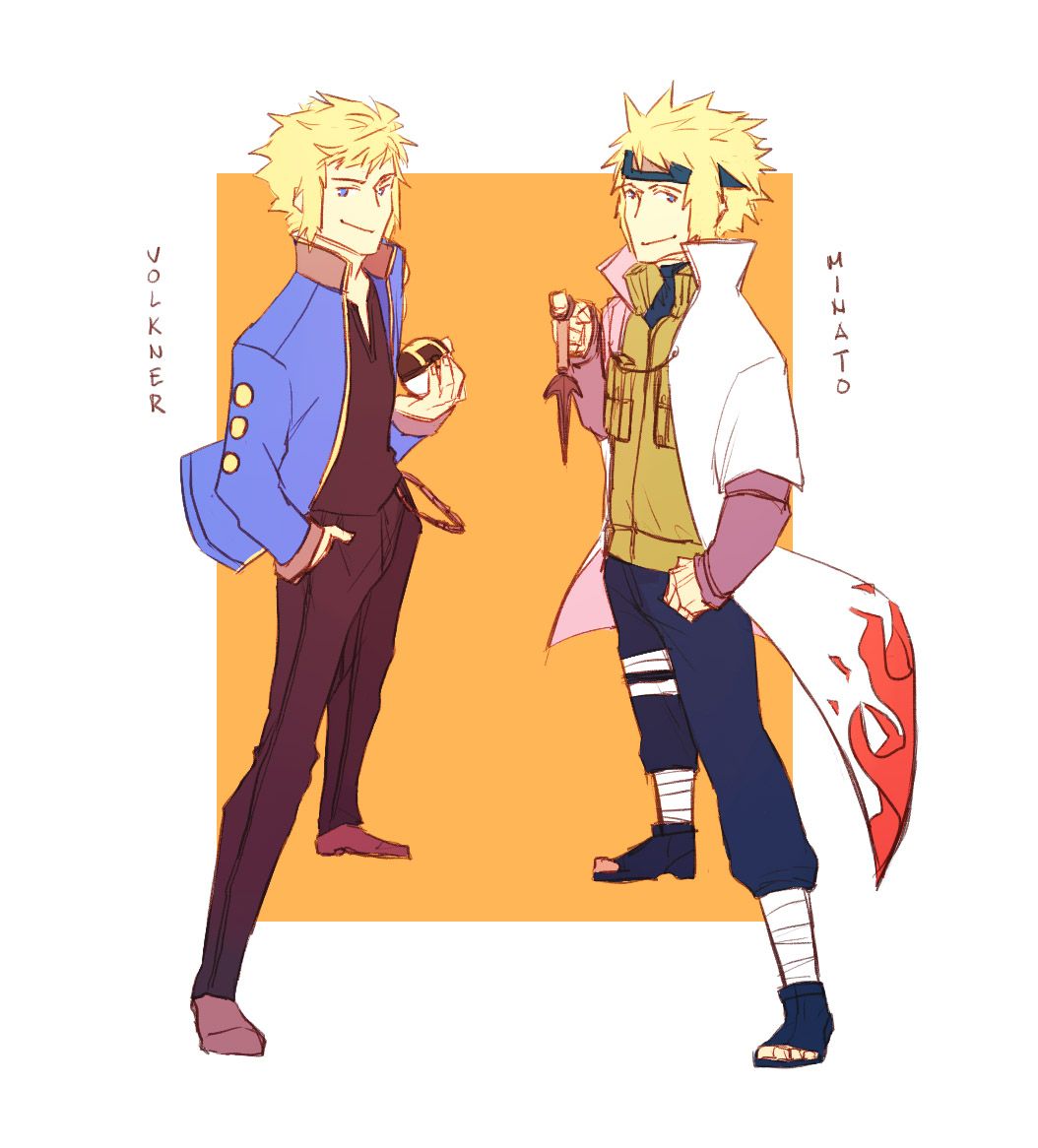 Tumblr artist @velvvetcat09 points out the strong resemblance between one Hokage and one Gym leader in this extremely accurate fan art. Minato, Konohagakure’s Fourth Hokage, and Volkner, Sinnoh’s strongest Gym Leader, have a lot more in common than just their blonde hairstyle.

Volkner specializes in electric-type Pokémon like his trusty Raichu and Luxray, while Minato gets his famous nickname, “Yellow Flash,” from his ability to move at lightning speed. Because of this, it makes sense for Minato to be an electric-type master like Volkner while consisting of the speediest electric Pokémon like Jolteon and Mega Manectric. 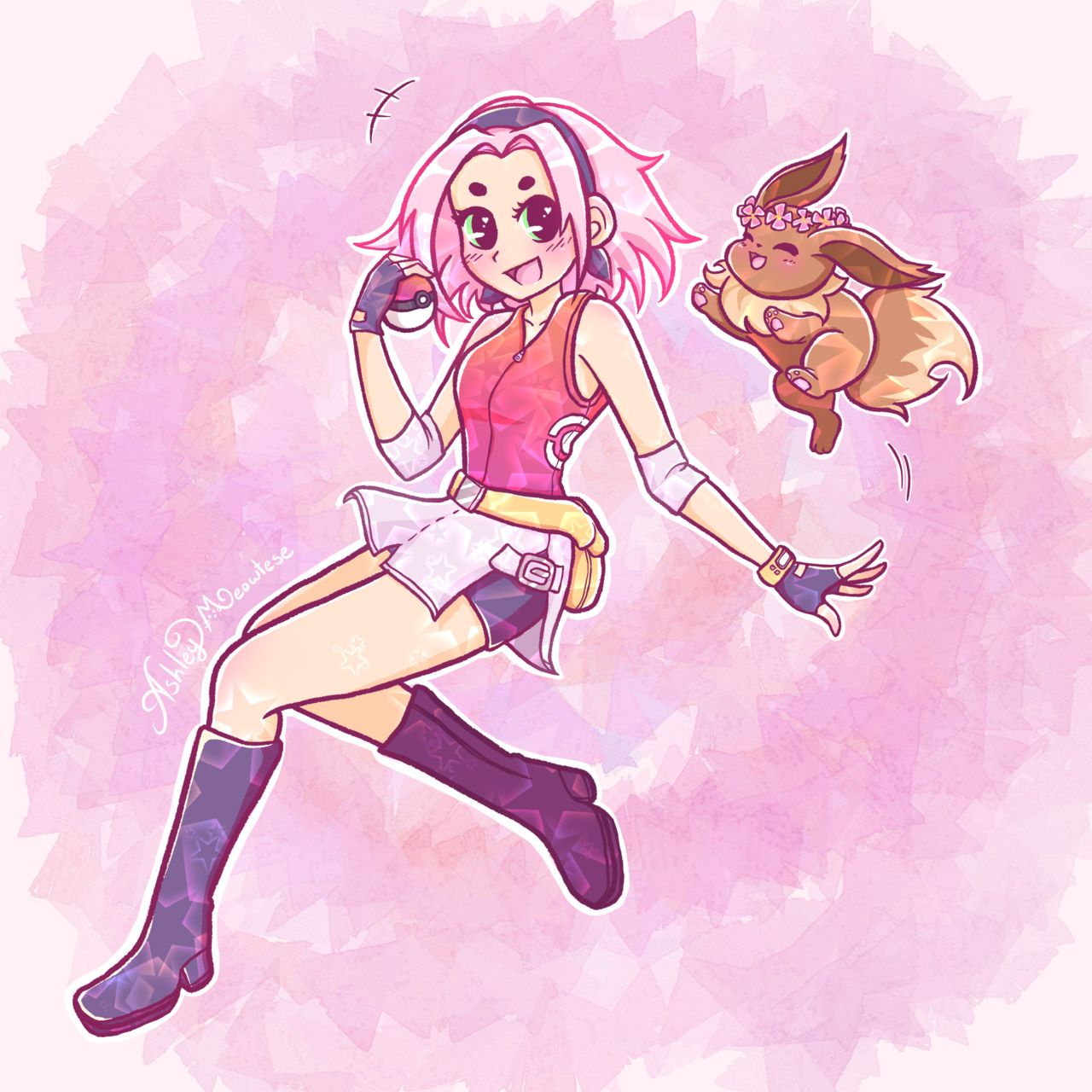 Sakura reimagined as a Pokémon trainer could go in many different directions depending on which trait to follow. She could have a team of deceptively cute Pokémon with monstrous strength like Bewear, a team of flowery Pokémon like the cherry blossom Cherrim, or a team of pink healers like Chansey.

Tumblr artist @ashleymeowtese chose to go the adorable, pink, and flowery route, but in a different way. In a trainer outfit that resembles Pokémon’s May, an excited Sakura leaps into the air with her happy little Eevee. The pink aura and flower crown on Eevee make this ninja-Pokémon duo extra sweet. 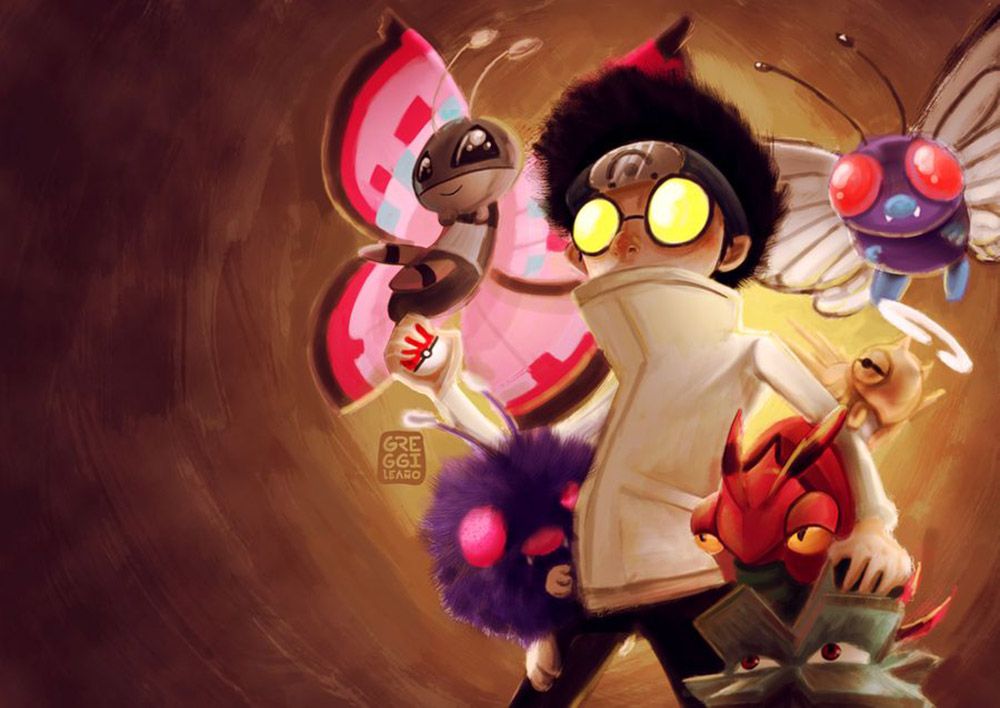 The first thing anyone thinks of when they see Shino is his love for insects and how they assist him in combat. He’s even a host for his little bug friends who literally live inside his body. So it only makes sense for Shino to have a full team of bug Pokémon as illustrated in this fan art by goyong on DeviantArt.

With two butterflies in Vivillon and Butterfree, two poisonous bugs in Venonat and Venipede, a destructive Pineco, and a haunting Shedninja, Shino’s team is equally as spine-chilling as him.

6 Painting with Sai and Smeargle 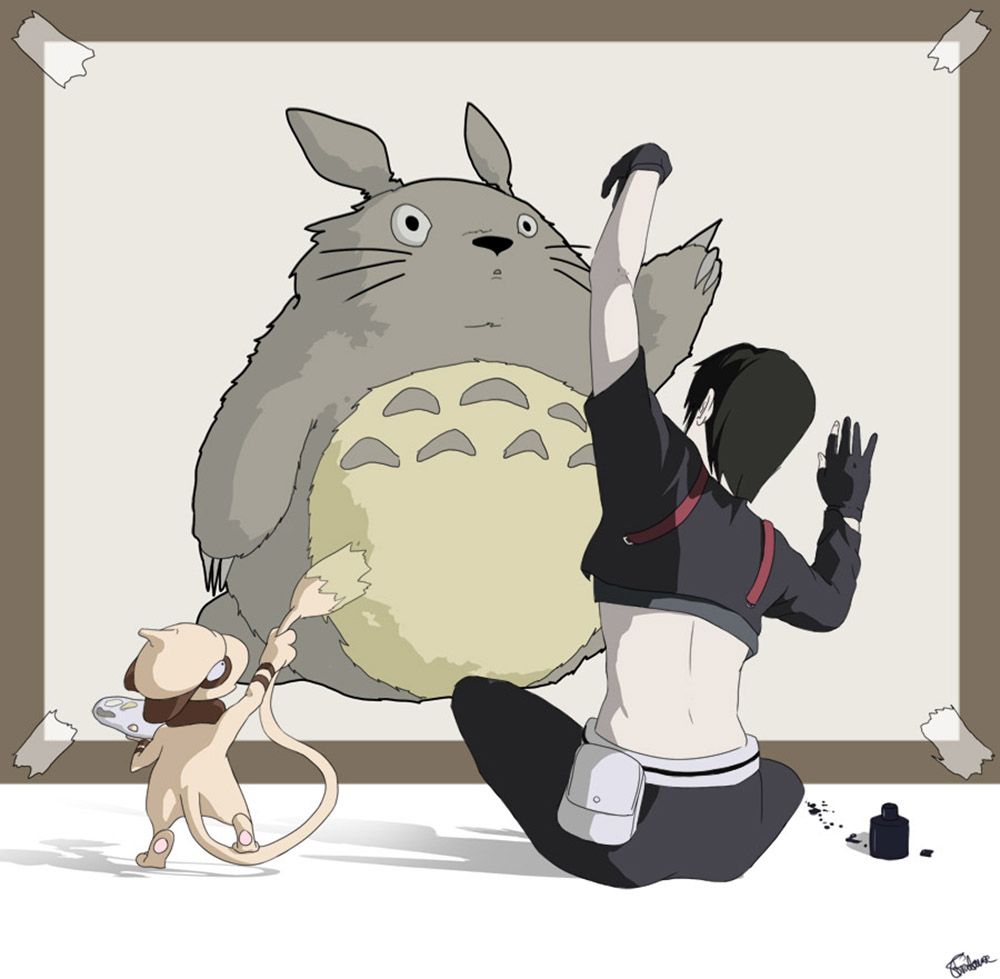 Coincidentally, there is a Pokémon who shares the same exact love for art as Sai–Smeargle. In this three-way crossover between Naruto, Pokémon, and Totoro drawn by DeviantArt user SirOpacho, Sai is peacefully painting the iconic Miyazaki character together with his artistic little Smeargle, who uses its tail as its brush. 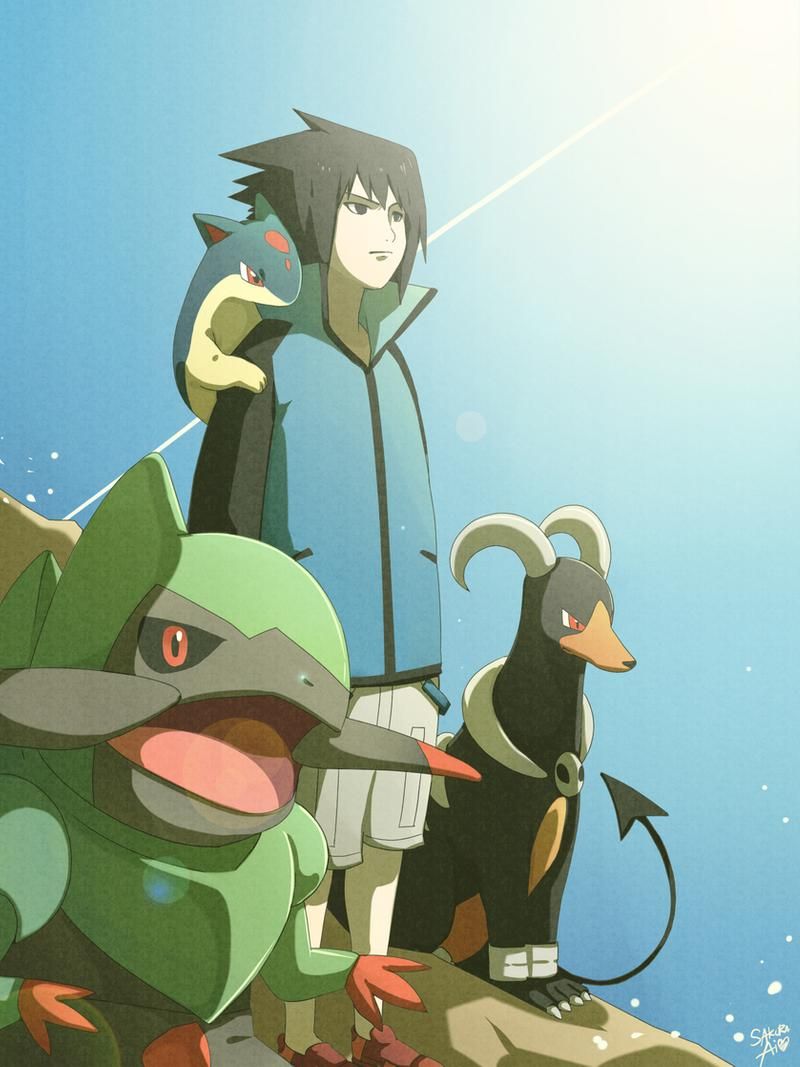 Sasuke was the rogue ninja who left his village in search of something greater than the life he had been living. This is not so different from young Pokémon trainers who leave their hometown to embark on a journey of fulfillment and strength.

That being said, while many typical Pokémon trainers like Ash Ketchum tend to travel with friends, Sasuke would be the type of trainer to travel only with his most loyal Pokémon and without any other human. This stunning fan art by moremindmel0dy on DeviantArt shows Sasuke looking off into the distance with his Fraxure, Houndoom, and Quilava all at his side.

4 The Copycat Ninja and His Copycat 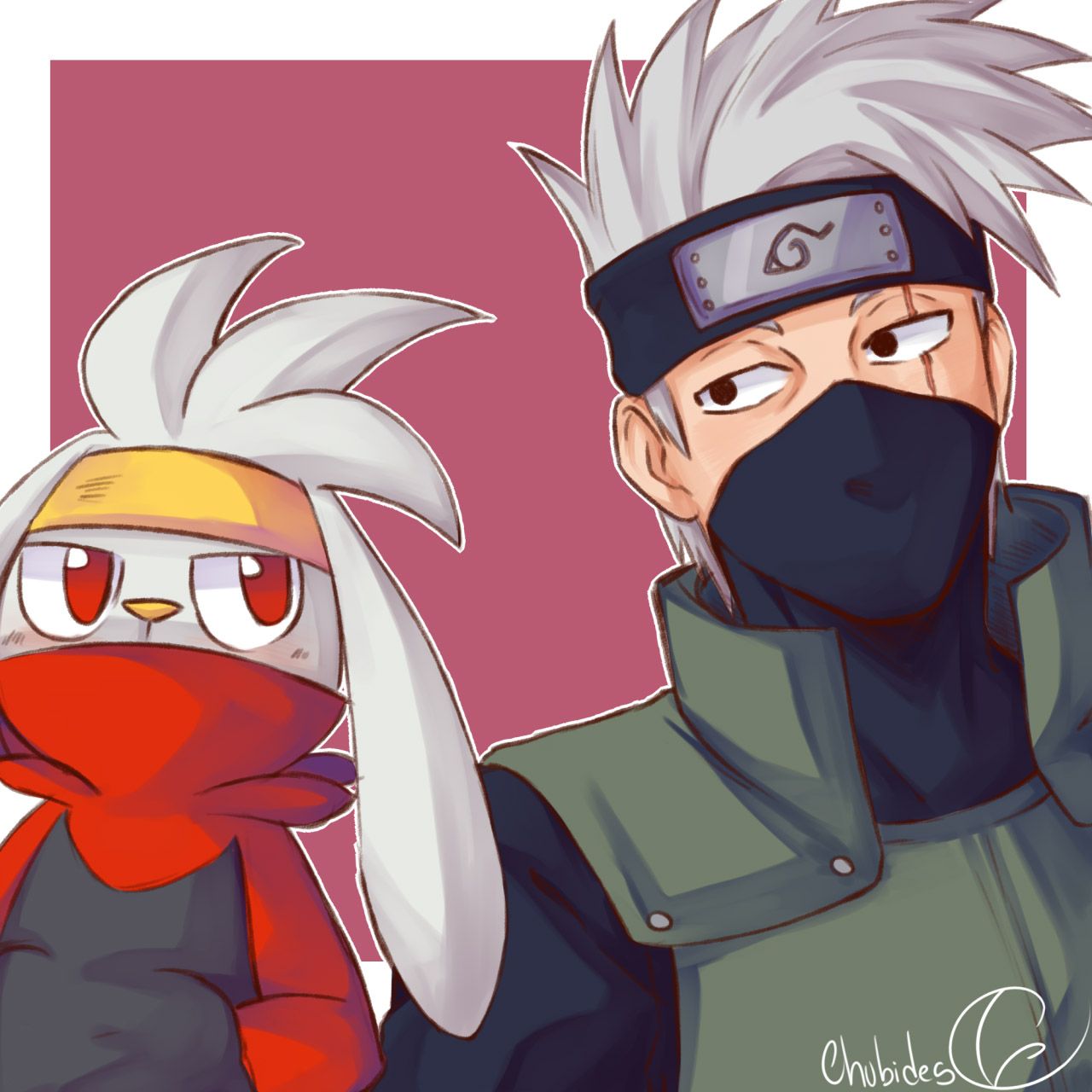 When the eighth generation of Pokémon arrived with Sword & Shield, fans were blown away by the newest additions to the Pokedex. For example, one of the Galar Region’s starters, Scorbunny, is not only an adorable bunny but also the pre-evolution of a masked ninja bunny named Raboot.

As seen in this wholesome fan art by Tumblr user @chubi-des, Raboot’s silvery spiked fur, headband, mask, and overall ninja vibes greatly resemble fellow silver-haired ninja, Kakashi. Together, Kakashi and Raboot would make a splendid team, capable of taking down any enemy with their impressive combat skills and taijutsu. They would be the ultimate father-child duo. 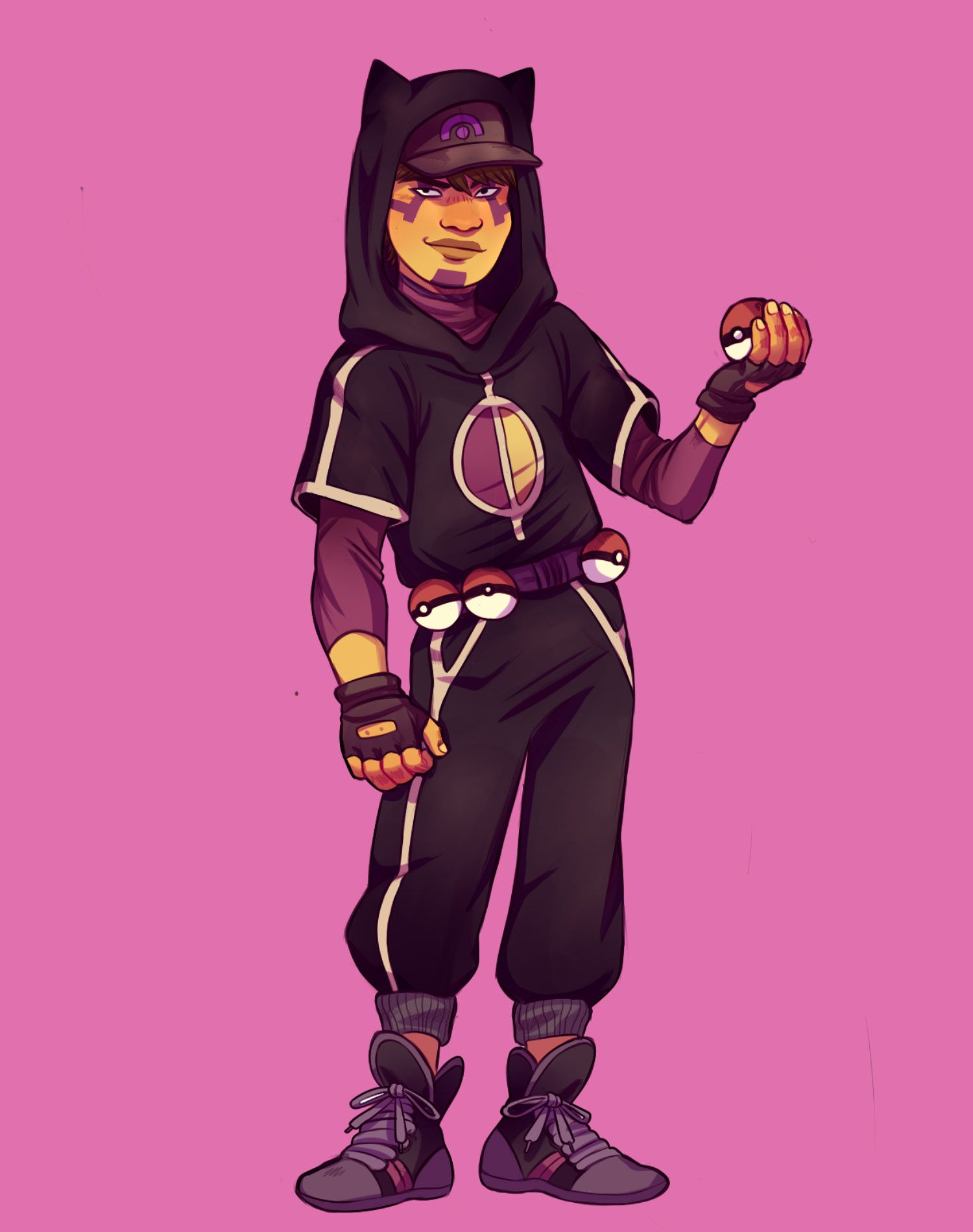 As a ninja of Sunagakure, Kankuro’s specialty jutsu utilizes puppets to fight for him, controlled through strings of chakra. He eventually became a skilled enough puppeteer to control multiple puppets at the same time–a feat that would be useful in a Pokémon double battle.

This beautiful fan art by @doodlingleluke on Tumblr shows Kankuro in a more modern outfit perfectly suited for a trainer while maintaining his distinct face paint, cat ear hood, and circular symbol on his clothes. Although all of his Pokémon are tucked away in their pokeballs, Kankuro would surely be a double battle specialist with the puppet Pokémon, Banette and Shuppet. 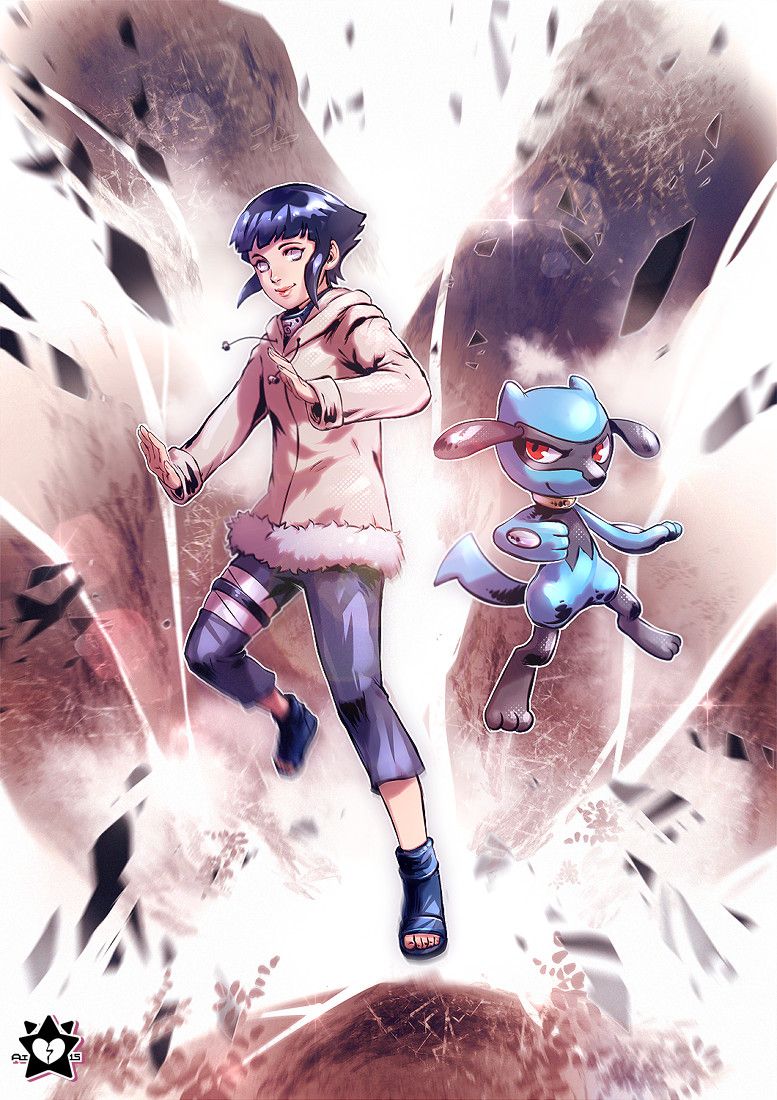 With the all-seeing Byakugan from the Hyuga Clan, Hinata has the ability to sense and see chakra in ways that most ninja cannot. She is able to not only sense the presence of chakra from extreme distances but also see and stop her opponent’s flow of chakra with gentle taps. In many ways, this is similar to the fighting Pokémon, Riolu.

Just like Hinata’s Byakugan and keen sensitivity with chakra, Riolu can sense aura, allowing it to manipulate and use that aura against its opponent in battle. One of Riolu’s moves, Force Palm, even mimics the Hyuga’s Gentle Fist technique in how it uses the tap of one’s hand to hinder their opponent’s ability to fight back. This striking fan art by E-X-P-I-E on DeviantArt perfectly captures the similarity in their fighting stance and technique.

1 The Frog and Toad Ninja

After spending time training with Jiraiya, Naruto learned how to summon an assortment of toads from scrolls to assist him in battle. He even gained access to Sage Mode after intense training with the toads. However, if Naruto were a Pokémon trainer, he would definitely team up with another amphibian ninja, Greninja, as pictured in his vibrant drawing by Ashaisha on DeviantArt.

While Naruto goes into Sage Mode with his toad eyes and enhanced strength, Greninja might also achieve newfound power in a form that resembles its ninja partner just as Ash’s Greninja had. With a strong enough bond, this frog and toad duo would be unstoppable.